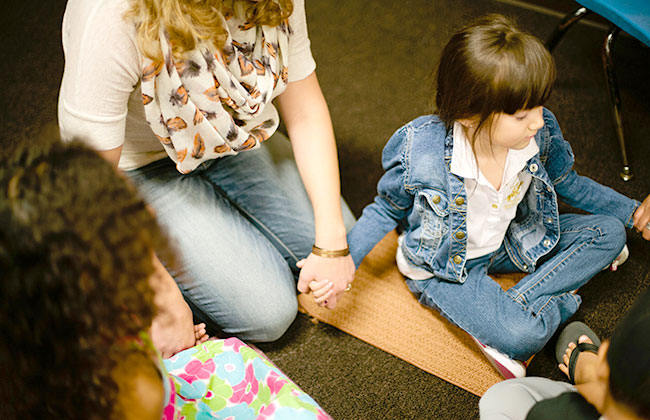 A Different Kind of VBS

Home › A Different Kind of VBS

At Addisville Reformed Church, children not only receive. They also give.

Planning for vacation Bible school (VBS) is no small task. Church planning teams recruit volunteers, choose a curriculum, paint intricate sets, gather supplies, dream up crafts, stock up on juice and snacks, and get the word out to neighborhood children.

On top of all that, Addisville Reformed Church in Richboro, Pennsylvania, has given itself one more task on its list of VBS to-dos: choosing a mission. Every year, the planning team asks, Who can we help this year? And every year, in response to that question, the children who attend VBS at Addisville Reformed support a cause—sometimes local, sometimes international.

“Adding a mission focus to VBS has been a long-standing tradition at Addisville Reformed,” says Douglas Dwyer, who celebrated 20 years as Addisville’s pastor in October.

The goal, he says, is to help children learn that they too can engage in Christ’s world mission. Over the years, they have raised money for everything from Heifer International, an organization that provides livestock to people in need, to relief efforts for Hurricane Katrina.

The Jesus Focus Ministry Food Pantry is a service of Bethanna, a Christian agency in Pennsylvania that provides adoption, child welfare, and behavioral health care services. During the week of VBS at Addisville, children supported the food pantry through a “Jesus Focused” day by bringing in snacks such as pretzels and granola bars. By the end of the morning, boxes packed with goodies were ready to be delivered to the pantry.

“Our students were very generous in their giving,” says Natalie Kelly, director of Christian education and director of youth ministry. Dwyer believes that the children’s generosity was fueled by the fact that they were helping other children.

They helped even more children by supporting the work of Christ’s Home for Children, an organization that provides group homes for children, a transitional living program for teenagers, and group homes for teenage mothers and their babies. Each day of VBS, the young participants learned about one aspect of Christ’s Home and were invited to bring in an offering for the organization.

Since Christ’s Home cares for children who have been abused and abandoned, the VBS team was careful to share the mission of the home in an age-appropriate way.

“We would explain there were boys and girls that didn’t have parents to take care of them or didn’t have the blessings they had,” Dwyer says.

Each day, the VBS leaders announced the latest amount raised for Christ’s Home. As the daily total grew, children would shriek with excitement, tap their fingers in pretend drum rolls, and pound their fists on the pews of the sanctuary. By the end of VBS, they had raised $2,800.

Children who come to VBS at Addisville leave with more than a take-home craft. They leave changed, knowing they have done something to help others. By sharing their gifts with others, they witness a God who can transform lives through the love of Jesus.

“When you present the message, you can’t help [but] transform,” Dwyer says.