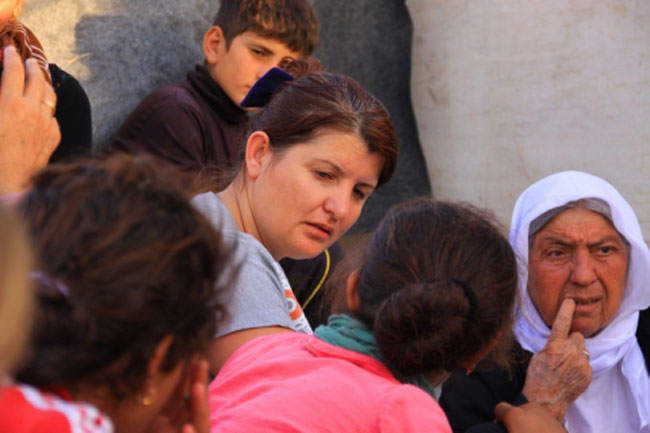 A Letter on the Refugee Crisis from Tom De Vries

Home / A Letter on the Refugee Crisis from Tom De Vries

Displaced people are woven throughout the narrative of our faith. The Israelites wandering in the desert. Naomi in Moab. The remnant in Babylon. Ruth in Israel. Over and over, Scripture teaches us to care for the stranger, the alien, the widow, and the orphan.

The growing turmoil in Syria and throughout the world has brought this issue to the forefront once again, as thousands of our brothers and sisters flee the violence in their Syrian homeland. We are shaken by the violence of the attacks in Beirut, Paris, and Baghdad. But Scripture tells us, “Do not be afraid.”

As Christians, it is our responsibility to open our doors—to offer care and shelter to those refugees who are seeking a safe place to land. We cannot let fear and the rhetoric of terrorism stop us from extending this basic hospitality to people in need.

Such a stance is hardly a new one in the RCA. In the 1993 Minutes of General Synod, I read this:

One of the most powerful themes of Scripture is God’s special love for resident aliens, “strangers within the gate,” They were rescued by God, healed, and held up as examples of faith and models of profound love…Just as God reached out in Christ to draw estranged humanity into God’s family, Scripture teaches Christians to treat the strangers they encounter as neighbors and family.

I echo the sentiments expressed by the National Council of the Churches of Christ in the USA in calling on our elected officials to not pander to fear. I am heartened to hear that Canada will be accepting 25,000 Syrian refugees by the year’s end, and encourage state and federal leaders in the United States to take a similar approach. To reject these refugees is to reject both their humanity and Christ’s charge to us to care for them.

I continue to pray and advocate for peace, not only in Syria but around the world. I pray that we will not give in to the hysteria that builds with every threat of terrorism. I pray that we will not let fear overshadow God’s call to care for the strangers among us. After all, as we look ahead to Advent and the celebration of Jesus’ birth, let’s remember that Jesus himself was once displaced—a child fleeing with his parents in the dark of night, seeking refuge in Egypt.

“The Lord your God…loves the foreigner residing among you, giving them food and clothing. And you are to love those who are foreigners, for you yourselves were foreigners in Egypt” (Deuteronomy 10:17-19, NIV).

Together in the cause,