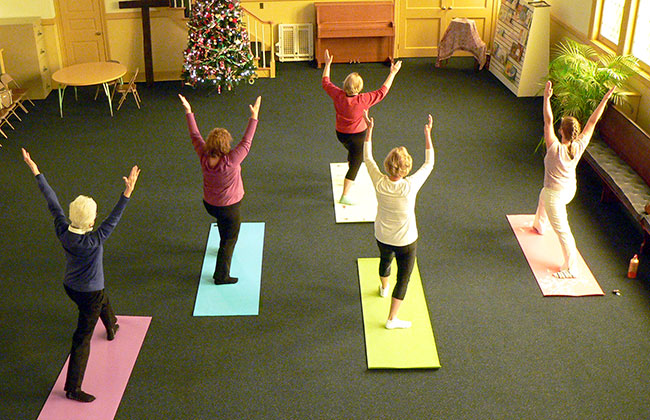 In north central New Jersey, one RCA congregation is making a big difference through the simple act of prayer—in many forms.

In the small community of Peapack and Gladstone, in north central New Jersey, one congregation is making an impact through the simplest of methods: prayer.

Several times each week, members and guests at Peapack Reformed Church gather for prayer in many forms. Some groups are small—only two or three people. Other events are whole ministries, reaching out into the community.

The congregation began to realize the importance of prayer about a decade ago through the encouragement of elder Oz Kavanaugh, who has since passed away.

“I remember [Oz] saying, ‘We need to become more of a praying congregation,’” says Kathryn Henry, pastor at Peapack Reformed. “By that she meant less emphasis on business at our consistory meetings, teaching our children how to pray, making more room in our worship services for prayer…and increasing outreach and inreach efforts based on prayer.”

Kavanaugh led the charge by starting a monthly prayer luncheon at the church, which Henry now leads. Over homemade soup, those gathered share prayer concerns and discuss different types of prayers. This gathering has become an outlet for senior citizens in the community—many of whom are not members of Peapack Reformed.

But that’s not all. Lay leaders at the church have initiated other prayer opportunities.

“These prayer groups came about not through recruiting, but at the Holy Spirit’s moving in the hearts of these individuals,” says Henry. “They came to me offering these services. How wonderful is that!”

There’s the intercessory prayer time, led by member Lisa Saunders on the first Sunday of each month following the worship service.

“Pastor Henry and I thought because the first Sunday is communion Sunday, there would be a special sacredness and sensitivity to prayer,” says Saunders. “Each month we have increased in number—we now have eight people who come. They are simply looking for support and appreciate sharing their burdens with God and others.”

There’s the yoga as bodily prayer class on Monday and Wednesday mornings, led by member Daina Gulbis. Held in the church fellowship hall, the class attracts both members of the church and community residents.

“We all need to take some time for ourselves, to slow down and actually listen to our bodies,” says Gulbis. “Sharing yoga has given me a chance to learn about myself, and also the community members in my sessions.”

There’s the centering prayer time every Monday morning at the church. Leader Barbara Knox describes centering prayer as “a method of silent meditation that prepares us to receive the gift of contemplative prayer, in which we experience God’s presence within us.”

And there’s the prayer shawl ministry, which offers physical and spiritual comfort. Thanks to volunteer knitters at Peapack Reformed, deacon Barbara Baker has been able to bless the residents of a senior care facility with lap robes, afghans, scarves, and hats.

“As one knits or crochets, a prayer is said for the future recipient or for the knitter herself,” says Baker. “God has been good to me in my 78 years, and I like to help others in need.”

This renewed focus on prayer at Peapack Reformed, says Henry, has done exactly as Kavanaugh intended. It has helped the congregation recognize the many ways to connect with God—and has the added benefit of witnessing to the community.

“Many are coming to realize that prayer strengthens and sustains our relationship with God, and that there are many ways to build that prayer relationship,” says Henry. “To be prayed for is incredibly moving, and thus, to pray for others is of vital importance.

“Prayer is not only individual, but also corporate—sharing prayer experiences makes it easier to witness to God’s presence in our lives.”