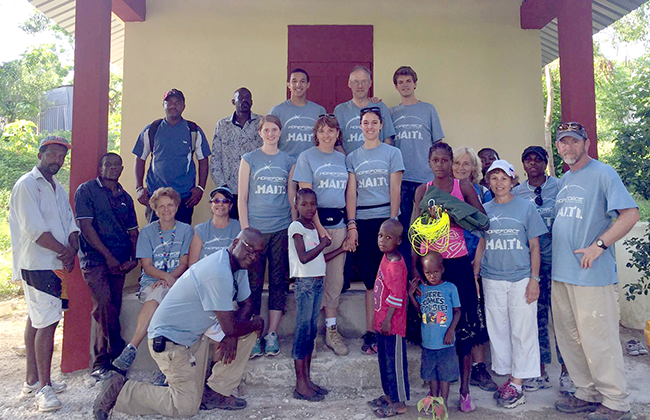 Members of Three Bridges Reformed got training so they can volunteer right after disaster strikes.

Increasingly, churches are engaging in mission in both financial and tangible ways—often by sending teams of people to the site of a natural disaster. But very few churches have the training to send people immediately after the disaster. Most people are not equipped to help in the specific ways that are often necessary in the following days.

That’s not the case, though, for the congregation at Three Bridges Reformed Church (TBRC) in Three Bridges, New Jersey. Members there have taken steps to get trained so they can be among the first responders to natural disasters.

One of those people is Sue Newborn, a member of TBRC. For more than 20 years, she has participated in short-term mission trips, traveling as far as Niger and Nepal, and as close to home as North Carolina and New Jersey. Newborn isn’t content with sending supplies or money; she wants to get in there and serve.

“I grew up at Three Bridges, graduated college, got married, and was frustrated that not a lot of young people came; it just didn’t feel like my church,” she says. “One day I was venting, and my husband gave me an ultimatum: ‘Find a way to be involved or go to a different church!’ So, I joined the mission commission where we just decided how to give away the money, and then that was frustrating to me,” she adds, laughing.

In 1995, Hurricane Marilyn left 11,000 people on St. Thomas homeless, and the commission set up a work trip for the congregation. TBRC partnered with a church on the island, St. Thomas Reformed, and sent three teams over the next two years. The congregation has continued to participate in short-term mission trips since then. In 1997, Newborn began coordinating trips.

Ryan Nace, pastor of TBRC since 2010, says about one third of the church’s 150 members are actively invested in mission. “People are reflexively looking outside, saying, ‘Someone needs help. How can we do that?’” says Nace.

Even children got involved last year in raising money to build a house in Haiti, where four TBRC teams have ministered in Sous Savanne, a village destroyed by an earthquake in 2010. A fifth trip is planned for December. Congregants have built shelters, led VBS, helped host a conference for mothers, and thrown Christmas parties. The church—both corporately and individually—supports education for a total of 27 children in the village.

In 2007, the church sought training through Hope Force International (HFI) so its members could respond more quickly to disasters. Involved in the critical first response work, HFI provides something frequently missing: Christians who are immediately available and spiritually ready to deploy.

“Their training is not for everyone,” says Newborn. “It’s not Disaster 101—it’s about your spiritual readiness to serve in a disaster zone. You are deployed within days of a catastrophe. It’s raw. Being spiritually centered is key to helping in a healthy and compassionate way.”

TBRC has now hosted HFI trainings twice, the most recent in March 2018, where volunteers from six different Reformed churches gathered for two days. The church’s teams to Haiti have partnered with HFI.

“It’s a ministry of presence,” says Newborn, explaining that the organization has three tiers of response for volunteers: immediate response, recovery, and rebuilding. “They train us how to come alongside people who are hurting and let them know they are not forgotten.”

Immediate response volunteers are contacted following a disaster to gauge their availability during the next six weeks. If needed and available, the volunteer goes on standby, ready to deploy. Although medical presence is often the first wave of international help, Newborn has learned there’s a job for everyone: cooking, scheduling arrivals, making airport runs, doing laundry. Volunteers pay their own way to get to a site and bring a sleeping bag, but once there, food, lodging, and transportation are provided through HFI and a local on-ground mission partner.

“Sometimes you may only have sandals and a bag on your back, but if you’re prepared spiritually you can go and plant seeds,” says Nace, who attended the training and wants to deploy at some point. “You may not harvest them, but the love of God can do amazing things even in the most brutal of environments. The thing I have been convicted of is that you need to find partners; if we try and do these things on our own, it’s just poor stewardship.”