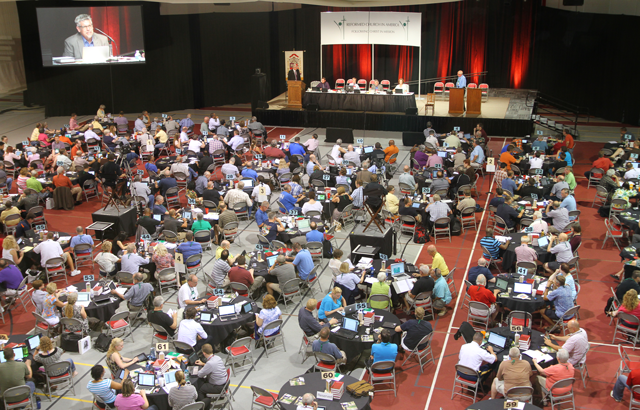 Synod will vote this year on whether to hold biennial General Synods, with a smaller “administrative” General Synod and an event for church leaders in the off years.

All delegates will take part in an all-synod advisory group process on Saturday afternoon to explore the implications of a biennial synod. The feedback from all of these groups will then be combined and brought to the floor of synod.

If synod approves moving to a biennial General Synod, their recommendation will be sent to the classes for approval. Two-thirds of classes must then say “yes” to that recommendation for it to take effect.

A 2012 work group report noted that the RCA has discussed a biennial synod for over 100 years; it has been on the General Synod agenda 24 times, and as of 2012 15 special committees had been formed to consider the issue.

The idea of a biennial synod was raised most recently in an overture from the Classis of South Grand Rapids at the 2011 General Synod. The reasons for it included saving money to use in other ways and perhaps decreasing assessments.

The overture led to recommendations, work groups, legal consultations, reports of the GSC and of the Commission on Church Order, and finally a task force that met in January. The task force is bringing two recommendations to synod to make changes to the Book of Church Order (BCO) to accommodate biennial synods.

Research by the Commission on Church Order has revealed that while New York law (the RCA is incorporated in New York) requires not-for-profit corporations to meet in-person annually, the annual meeting may be conducted by a smaller group of individuals who represent the full assembly.

This means the RCA could hold a “full” General Synod one year and a smaller representative General Synod the next. To do this would require legal work, substantial amendments to the BCO, and probably the transfer of some responsibilities (and authority) from the General Synod to the smaller body with fewer members. These proposed changes are before General Synod 2014.

The task force that met in January suggested that if a biennial General Synod plan is adopted, the smaller administrative General Synod in the off-year should do only what is absolutely essential to satisfy the requirements of New York law, properly conduct a meeting, and enable all the General Synod teams to fulfill their responsibilities. They suggested that this smaller group should be made up of 24 General Synod delegates.