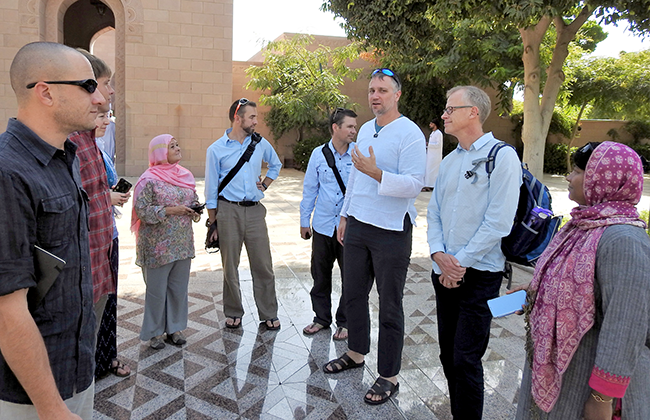 Blessed Are the Peacemakers

Home / Blessed Are the Peacemakers

Reformed pastors dialogued with Muslims in Oman about religion; here’s what they learned and why it’s important.

“Estimates are that by 2040 or 2050, there will be an equal number of Muslims and Christians in the world. The day is fast approaching when Christianity will no longer be the largest religion in the world,” says Justin Meyers, an RCA minister and associate director of Al Amana Centre in Muscat, Oman.

In this shifting global religious landscape, there is potential for conflict between people of different faiths. “Learning to dialogue across faith and cultural lines,” says Meyers, “will be an essential skill for Christians to have as we enter into this reality.”

Al Amana Centre aims to facilitate peaceful dialogue about religion between Christians and Muslims. They do this by inviting Westerners—particularly Christians—to participate in immersion trips that offer spaces for interfaith discussion and learning.

Few Muslim-majority nations are better poised than Oman to facilitate these experiences. Al Amana grew from medical and educational work begun in Oman by the RCA more than 125 years ago. The Sultanate of Oman protects free expression of religion so long as one’s faith practice doesn’t disturb the peace or denigrate other beliefs, and it has a rich culture of hospitality.

In November 2017, a group of eight pastors from the RCA and the Christian Reformed Church in North America went to Al Amana Centre to begin learning about and developing the skills to dialogue with people who practice Islam. They met with faith leaders, visited mosques, shared meals with local residents, and were trained in Scriptural Reasoning, a method for Muslims, Jews, and Christians to dialogue about one another’s sacred texts. After a week in Oman, half the group traveled on to Bangladesh and the other half to Egypt to experience additional vantage points. Two members of the group were pastors Hartmut Kramer-Mills of Spotswood Reformed Church in Spotswood, New Jersey, and Josh Wall of Fifth Reformed Church in Grand Rapids, Michigan.

Kramer-Mills embarked on this trip not only for the sake of the experience itself but also for the prospect of becoming part of a pilot program designed to build interfaith relations between Christian and Muslim congregations in his community. “One of my assumptions was that it would be difficult in discussion with Muslim partners to fully state basic doctrinal convictions of my faith without offending the other,” he says, but “I learned better during a meeting on my last day in Egypt.”

During a Scriptural Reasoning exercise, the RCA delegation and a group of Muslims “discussed the base for Muslim hospitality in the oneness of God and the base for Christian hospitality in the believer’s gratitude to Jesus Christ.” Kramer-Mills sensed appreciation from his conversation partners that the Christians would state their doctrine clearly without trying to placate them. “We parted in good friendship,” he recalls. “Apparently, our ties and the mutual respect we had for one another were stronger than our theological differences.”

Wall was driven to pursue this intercultural immersion opportunity to learn what it might mean for his church to be better neighbors to the Muslims in their area. His experience with Al Amana demonstrated that cross-cultural, interfaith encounters “[show] another angle of what it means to be created in the image of God, and that God’s created order extends well beyond our narrow experience.” The trip compelled him to teach a series at Fifth Reformed on the basic tenants of Islam and what the implications might be for Christians as they publicly live out the gospel.

Kramer-Mills has launched a friendship group with members of Spotswood and the New Brunswick Islamic Center. Their intent is to share one another’s culture, read books and watch films together, study their sacred texts, and become true neighbors. “It is important for us to establish this kind of mutuality. It helps us model peaceful ways of togetherness in a world torn apart by strife. It may also enable us to talk about problems like the growing trends of secularization that seem to characterize Western society today,” he says.

One of the biggest misconceptions Al Amana seeks to dispel is that Islam is inherently violent; the organization also emphasizes that the stereotypes go both ways. Meyers hopes that trip participants will represent a vision of Christ to the people of Oman, Egypt, and Bangladesh “that will counter what the people see here in our media and the felt experience of Western power in the region.” Kramer-Mills and Wall are carrying on the work exactly as Meyers hopes participants would—“that [these trips] may create experiences and stories of the people here that they can bring back with them to their home communities [to] help nuance the dominant views of Muslims and people from this region,” Meyers said. Wall echoed this observation, saying, “We are all made in God’s image,” and “[we’re] all looking for hope”—Muslims in Oman and Christians in North America alike. Pastors from the trip occasionally have a group call to continue their learning and support each other as they apply that learning in their congregations and communities.

Above all, Meyers wants Al Amana guests to develop empathy for the people in their home communities who are unlike them, utilizing new skills to build peaceful relationships with them. “Matthew 5 reminds us, ‘Blessed are the peacemakers, for they will be called children of God.’ When we build peace with our neighbors, especially when we are public with our Christian faith, our neighbors will see us as children of God and see in us the love and peace of Christ.”

Watch Josh Wall and Jay Blankespoor, a CRC pastor from the trip, share about their experience in Oman.