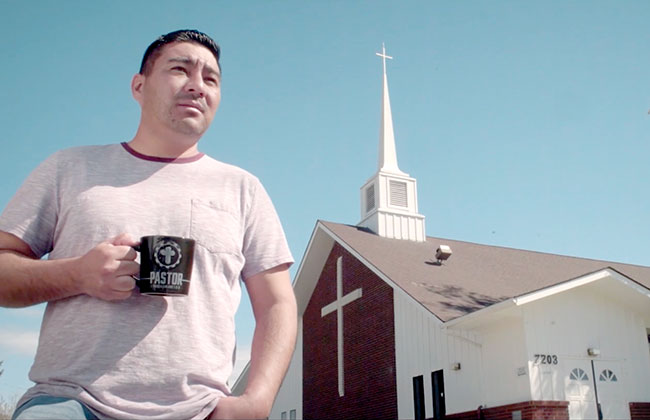 Bringing a Church to Life

Home / Bringing a Church to Life

With conviction, along with fear and trembling, the consistory approved the motion.

They’d be starting a new Hispanic ministry. They didn’t know how it would work. They didn’t think they could afford it. But Frank Meneses, right there at the table, would be their church planter, and they took a leap of faith.

A few months later, a phone call affirmed the decision in a big way.

Pastor Bill Van Herk got a call from a virtual stranger who had just read a piece in the newspaper about East Valley Reformed’s 115-year anniversary. The story mentioned that the congregation was starting a Hispanic ministry.

As elder Mark Van Kommer tells it, the two started talking about the Hispanic ministry. Van Herk shared the congregation’s excitement and also explained that they were trying to figure out a lot of things: cultural differences, logistics, financial burdens.

The man explained that his grandparents had helped found East Valley, and asked about the financial difficulties. Van Kommer recounts the exchange: “Bill says, ‘We’re still paying off the mortgage on our building. And the guy says, ‘How much is it?’ Bill told him. And he says, ‘I’ll send you a check.’

“And he did it. He paid off the mortgage,” Van Kommer says, wonder in his voice.

The $75,000 was completely unexpected. “It was like a burning bush in front of you! How can God be any more relevant than that, to answer that prayer? [We’d been] going to God in prayer about how to make it work financially, and all of a sudden he answers it.

“The ways things have been brought together, it just gives you goosebumps.”

The money was one of a series of “goosebump” developments, according to Van Kommer. The first came after he agreed to be a last-minute delegate to General Synod 2016.

He knew he’d be voting on issues facing the church, but he also had a secondary agenda: “What could I do for my little church here on the corner in Yakima, Washington, at East Valley Reformed?

“Honestly, our church was literally dying, because the average age in our congregation is over 70. Every time somebody dies, you have one less member. I’ve been a deacon and an elder, and so I knew the financial side too, and was just really concerned about everything.”

So Van Kommer packed his bags and headed to synod in Chicago. And every chance he got, he plied people for ideas.

“At every break, at every meal, even in the dorm at night, I would just start asking questions. How do you guys do church? What do you do to differentiate yourself? How do you connect to your community?”

At opening worship, he met Randy Bohl, then a development officer for the denomination. When Van Kommer talked about the growing Hispanic population in Yakima, Bohl said, “You really need to get ahold of Eddy Alemán.” So Van Kommer started looking for him.

“Next thing you know, I sat down at dinner the next night, and the guy sitting across from me at dinner is Eddy Alemán!”

Alemán is director of strategic leadership development and coordinator of Hispanic ministries for the RCA. “I told him we were struggling, we were having a hard time connecting,” Van Kommer recalls. “We didn’t know how to, frankly, break down the barriers between the cultures of our church and our community.”

Alemán offered to help and, after synod, did some research that confirmed the need for a Hispanic ministry in Yakima. A few months later, Alemán visited the church, where he met with the consistory and preached during Sunday worship. He also went to a Cascades Classis meeting to talk to the person in charge of church planting. And he brought someone along with him: Frank Meneses.

Meneses was a young leader from Phoenix. By December, he and his wife, Judith, and children Josiah and Cesia had moved into the parsonage in Yakima.

“What brought me here? I have to say that it’s God’s calling,” he says. In Yakima, surrounded by hops fields and apple orchards rather than urban desert, Meneses is planting a church.

How do you start a church? “You go into the community and start meeting people around you,” Meneses says. “Just take your kids to the park, and there’s people there! You start conversations with people, and that’s basically how you get a relationship going, and start sharing down the road what you’re doing here.

“It’s all about building relationships in your community. That’s how you start a church. … You cannot expect people to come to your church; you basically have to go to them.”

That approach shapes much of Meneses’s work as a church planter. Not long after his move to Yakima, he met with some school principals. When they mentioned a language barrier with the parents of some Hispanic students, he started hosting ESL classes at the school.

He also plans community events and gets help from the congregation at East Valley Reformed, which he’s now part of. He’s organizing puppet shows, and he’s at the local Easter egg hunt with hundreds of hot dogs and snow cones.

Living in the East Valley parsonage has been an unexpected boon for Meneses in getting his church plant off the ground. People often ask why the family lives so close to the church. “Our response is, ‘We’re here to start a church in this community. We’re here to share the gospel,’” says Meneses. “It’s one of the beautiful things: by living in the parsonage, the community knows who you are. They know who we are, and hopefully they will know who Jesus is.”

Iglesia Vida, or Life Church, is the congregation Meneses is starting. The church will officially launch on Easter Sunday, and is currently building a core group. That group meets every Sunday night at the Meneseses’ house. When they outgrow that, they’ll move to East Valley’s fellowship hall.

The core group is mostly young families with kids, a mix of Hispanics and Caucasians.

“They’re just seeing the vision and wanting to be a part of this.”

That vision is to be a multicultural, bilingual church that feels like family and reaches its community with love and the life that Christ gives.

The bilingual element has been an unexpected challenge. “We’ve been getting second-generation Hispanics who all speak English,” Meneses says. “The first generation are working pretty much seven days a week; that’s been challenging to get them to a small group. During harvest season, May to October, everybody is out working, including Sundays.” And when harvest season is over in Yakima, they follow the crops up and down the coast, going where there’s work.

The core group is trying to start a completely Spanish side to the ministry and has made some connections with first-generation immigrants who work office jobs and live in Yakima year-round. Meneses hopes that a better relationship with this established first-generation community will help them bring migrants into the church family over time.

Meneses’s role at Iglesia Vida/Life Church is just one part of his church planting work. He’s also hoping to oversee six additional church plants in the Northwest United States in the next five years, as part of the RCA’s goal to plant 50 Hispanic churches in five years.

“We want to see at least two [new] churches next year here in the Northwest,” he says. “Right now, we’re praying that God would send workers.”

It’s not just the new people joining Iglesia Vida/Life Church that are being transformed. East Valley Reformed Church has discovered something new, too.

“The church has purpose, and it has a direction, and they feel the power to make a difference in the community,” Van Kommer says. “We have some wonderful ministries that they’ve worked hard on over the years—a food pantry that they distribute food once a month; we serve hundreds of families. We’ve had a successful VBS and everything, but nothing was very long-lasting. We never saw any response as far as people checking us out on Sunday morning. Now we’re starting to get visitors, and people are interested. [They say,] ‘Oh, you’re the church that’s doing the Hispanic ministry.’”

Before the Meneses family even moved to Washington, the congregation came together to remodel the parsonage—and the welcome didn’t stop there.

“They have been really supportive,” Meneses says. “They embraced us. They’re praying for us. They help us in our outreach events. They have really come alongside us. They’ve just been loving people.

“They really want to see this being a success.”

By getting to know the Meneses family, and by working alongside them to share the gospel, Van Kommer says, “People are starting to be more accepting of people of different races, different colors, and different backgrounds. That’s the beauty in all of this.

“I noticed a real healing in our church.”

Maybe Eddy Alemán can help your church, too. To explore the possibility of Hispanic ministry in your area, contact him at ealeman@rca.org or 616-541-0866.