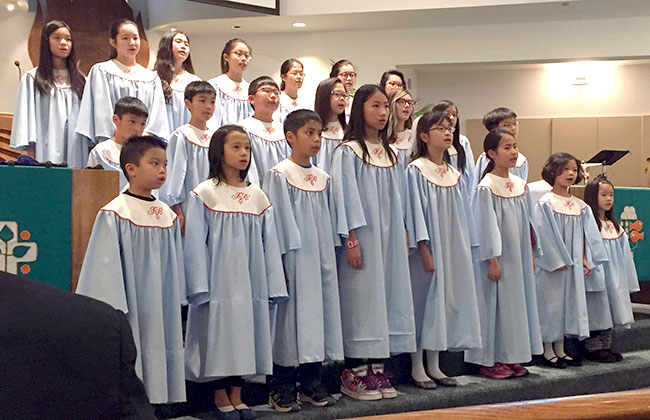 Fujian Evangelical Church has a long history of mission. Its own roots date back to the 1840s in Xiamen, China.

When I pulled into the parking lot of Fujian Evangelical Church (RCA), in Richmond, British Columbia, there was a lone figure standing by the front doors waiting to greet me. It was David Tsai, the church’s senior pastor and my guide for the afternoon. David welcomed me with a warm laugh and graciously invited me into the church building.

The first thing you see upon entering the foyer of Fujian Evangelical, before you even remove your coat, is the mission bulletin board. It is a map of the world with pins in mission outreach locations and photos of missionaries the church is supporting. Clearly this is a church committed to mission. That’s not surprising, given its roots.

In 1842, RCA missionary David Abeel became the first of 150 RCA missionaries to serve in Xiamen (Amoy). He established a mission station there, and the gospel spread slowly but steadily through Fujian Province. The first Protestant church in China was built in 1848 as a direct result.

In 2014, more than 150 years later, Tom De Vries, then general secretary of the RCA, described his visit to Xiamen, China, this way: “I stood on the steps of Xinjie Church reading a plaque. It said: The first Protestant church in China. The church had been planted by RCA missionaries in 1848. I met Christians on my visit whose spiritual roots go back to the mission that church grew out of, and who are grateful for the legacy of RCA mission. It has contributed significantly to the growth of the church in China, which some now estimate at over 200 million people.”

Halfway across the world in Canada, Fujian Evangelical Church is another powerful witness to that legacy. After our tour of the building, David and I met Alfred Kwong, an elder, over a lunch of pho soup, and David explained how Fujian is connected to the RCA mission in Xiamen. Fujian Evangelical Church was founded in January 1985 by five families from the Philippines who had immigrated to Canada and settled in Vancouver. David described how, as the church grew, it continued to attract Minnanese-speaking immigrant families (from the Philippines, Taiwan, Hong Kong, and Singapore). About a dozen of the church’s first families came from Gulangyu, a pedestrian-only island off the coast of Xiamen, Fujian Province, in southeastern China.

David told me, “RCA missionaries had established a girls’ school there called Chin-tek School and a church named Trinity Church. Many of these elderly saints are now with the Lord. A handful are still actively participating at FEC, including Ms. De Chin Dee, who is 93 years of age.”

Fujian now includes about 300 worshipers in four services: two in English, one in the Minnan dialect, and one in Mandarin. When I asked David how he hopes church members will carry forward their missional legacy, he said he would like to “continue to encourage and promote participation of our congregants in outreach and missions, through prayer, giving, and becoming better informed and connected to missionary endeavors.” Fujian Evangelical Church hosts quarterly “Missions Moments” when the entire congregation is updated on missionary outreach and prays fervently for God’s kingdom work to be done.

David’s prayer is that as Fujian Evangelical enters its thirty-third year, the new and younger generations will remain faithful to their missional roots.

Marijke Strong is executive secretary of the Regional Synod of Canada.