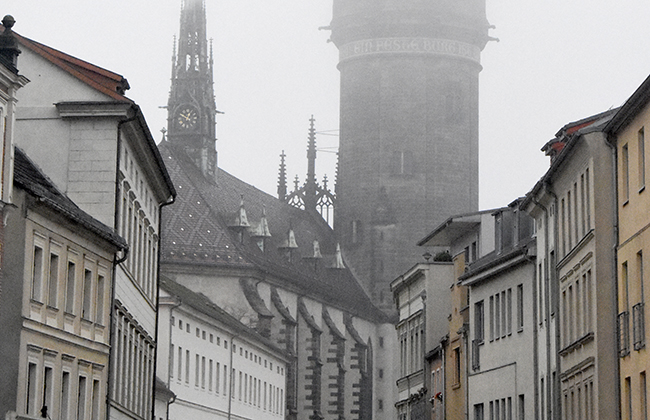 Church Unity 500 Years after the Reformation

One delegate’s experience at the World Communion of Reformed Churches’ 2017 General Council.

Stacey Duensing didn’t need to be asked twice when she was approached to represent the RCA at the World Communion of Reformed Churches’ gathering this past summer.

“I said an enthusiastic ‘yes’ before even checking my calendar to see if I was available,” Duensing says of the opportunity.

Duensing served as a delegate—one of four from the RCA—at the WCRC’s 2017 General Council, held in Leipzig and Wittenberg, Germany, this summer. The WCRC is an international community of more than 225 denominations, of which the RCA is a member, working together for unity.

Duensing heard theologians from around the globe speak on topics like economic justice, theology, strengthening communion, and gender justice. These speakers included RCA general secretary emeritus Wes Granberg-Michaelson, who spoke about mission in communion. Delegates also participated in the decision-making process of the council, giving feedback on the proposals presented.

A recent graduate of Western Theological Seminary, Duensing says she was most struck by the conversations on economic justice and the concept of empire.

“The council talked of ‘empire’ often as a broad term, meaning the abuse of power by systems, governments, and people over the powerless and marginalized. … It was also very common for the United States to be used synonymously with the term ‘empire.’ It was a truly humbling experience to talk to [delegates from other countries] and realize that they are acutely aware of news and politics in the United States—because it often affects them.

“I realized at WCRC that just by being in the United States, I am participating in this system of ‘empire’ and economic injustice throughout the world. … [Our] policies, laws, and economics affect our brothers and sisters around the world for good and for ill. There is so much I have to learn about this.” (Themes of empire and economic and ecological injustice are central to the WCRC’s Accra Confession, adopted in 2004. Visit wcrc.ch/accra to learn more.)

Duensing and her fellow delegates also had the honor of meeting and worshiping in Wittenberg, the German town where Martin Luther launched the Reformation 500 years ago. But while Luther’s actions resulted in a split of the church that remains today, the WCRC focused on taking steps to unite the global church.

“As someone with Lutheran roots, I was extremely excited to go to Wittenberg,” says Duensing. “I would have the opportunity to walk through the streets and see the places I had heard about since my childhood. The work that Luther and the other Reformers did was necessary and important for the theological and biblical integrity of the church at that point in history. However, when the WCRC met in Wittenberg … the work of the Reformers was both upheld and lamented. What was so stunning about our day in Wittenberg was to see history build upon itself. The church that went through the Reformation is continuing to reform.”

“In this 500th year [of the Reformation], we’re trying to understand the ways in which we can move forward in Christian unity,” says Monica Schaap Pierce, the RCA’s ecumenical associate and a delegate to the WCRC. “After years of being in dialogue with Catholics both nationally and internationally, we’ve seen that what brings us together greatly outweighs what keeps us apart.”

To demonstrate this commitment to unity, the WCRC signed an association agreement to the Joint Declaration on the Doctrine of Justification in Wittenberg. This agreement signifies a coming together of Catholic, Lutheran, Methodist, and Reformed churches “to strive together for the deepening of their common understanding of justification [how we are made righteous before God].”

“We’re saying to fellow Catholic Christians, we agree on central issues of salvation,” says Schaap Pierce. “It does away with some of the caricatures we’ve made of each other. Catholics have seen us as only interested in faith and personal faith, and we’ve caricatured Catholics as only being interested in works. [The agreement] gives us a new lens to understand that we’re all part of one body.”

Ecumenical relations are an important part of ministry for Duensing. She served as an ecumenical delegate for the RCA to the 2016 Annual Convocation of Christian Churches Together, and she helps Church on the Hill (RCA), where she is a pastoral intern, participate in an ecumenical women’s shelter that serves its Flushing, New York, community. Her experience at the WCRC confirmed the importance of such work.

“Ecumenical work enhances the RCA because it gives us a chance to participate with other churches in something larger than our own communion,” says Duensing. “We have so much to learn from one another. And our witness is greater when we are united.”

WORSHIP: Are you planning to commemorate the Reformation’s 500th anniversary in your church? We’ve put together some resources for your church to use. Find them online at www.rca.org/reformationsunday.