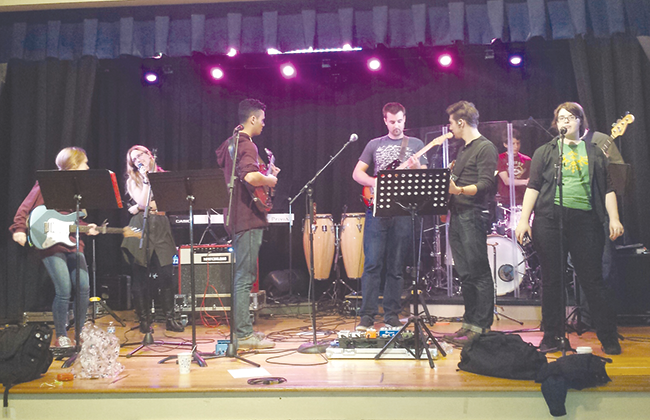 It reads like a modern-day parable: unexpected guests, and somehow the food was enough to go around.

Preakness Reformed Church (PRC) in Wayne, New Jersey, was gearing up for a busy evening. Members of the church’s band, Berdan Hall, were setting up for the PRC Coffeehouse—an open-mic night for church and community members to share their musical gifts with one another. Not wanting to stop for dinner, they had brought along food to share with their bandmates as they plugged in microphones and set up the lights.

Soon, however, guest musicians from the community began trickling in, ready to do their own sound checks before the show. It was early evening and none of them had eaten, either. The members of Berdan Hall looked at each other with concern; they hadn’t planned on this many people for dinner.

“Somehow, even though we were almost certain that we didn’t have enough, we were able to share our meal with close to 35 other people—and even have extra to spare,” says Glenn O’Connell, a PRC elder and co-founder of Berdan Hall. “We affectionately refer to it as a modern-day retelling of the loaves and fishes story.”

This story is just one of many instances where O’Connell has seen God at work in the PRC Coffeehouse, which he helps run along with Berdan Hall lead singer Arno Miller. The quarterly coffeehouse events offer musicians an opportunity to share in worship with others outside of a conventional worship service.

“The coffeehouse is run by PRC, but was and always has been intended to be a community affair,” says O’Connell, who engineers the sound and lights for each show. “We welcome performers not just from our congregation, but also from other churches and the community as a whole.”

The PRC Coffeehouse launched just over a year ago, and O’Connell says each event has drawn more than 100 people to the church, either as musicians, audience members, or other assorted acts from nearby churches and the community. Each evening features at least five different group performances, including Berdan Hall.

The congregation at PRC wholeheartedly supports O’Connell’s and Miller’s efforts, viewing the coffeehouse as a unique way for people to both share their gifts and be embraced by the community.

“Our church has always viewed community outreach as integral to our mission as a congregation of believers,” says O’Connell. “These events are one of the myriad ways that PRC works to facilitate worship with others in the community, and share the Word of God.

“For me, the most exciting thing is that we can bring people into our church space to showcase a tangible expression of our love for God, music, and one another.”

O’Connell and the coffeehouse team plan to continue these events for the foreseeable future, so that those who do not regularly attend church will have a safe place where they can encounter or connect with God.

“In our eyes, this event is not simply a music show, but a chance for all participants to come into closer contact with God through the use of their God-given talents,” he says.