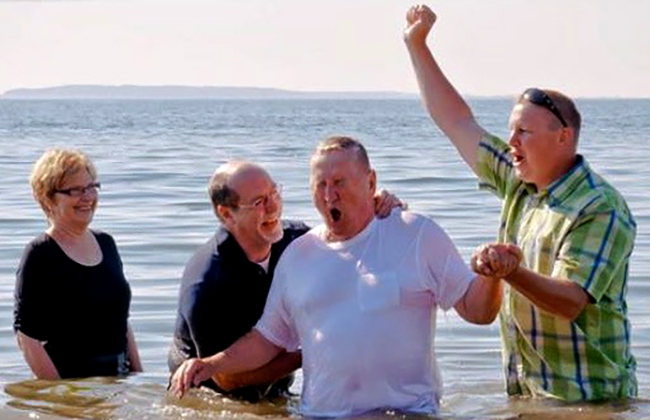 How a coastal congregation’s family focus is impacting its unchurched community.

The community of Birch Bay, Washington, is a hodgepodge of demographics. Located on the coast, less than ten miles south of the U.S.­­­–Canada border, its neighborhoods range from wealthy gated communities to low-income trailer parks. Its residents range from retirees to young people who work at a nearby oil refinery, from Canadians with summer cottages to naturalists wanting to escape city living.

One thing Birch Bay residents have in common is the likelihood of being unchurched. In a community of 10,000, just four churches exist. (Compare that to 30 churches in Pella, Iowa, another town of about 10,000.)

Water’s Edge Church (RCA) is one of those four churches. Planted in 2008 by three other RCA churches in the county, Water’s Edge is also a hodgepodge: from toddlers to retirees, its attendees represent many socioeconomic levels and come from not only Birch Bay but also four other nearby communities.

And Water’s Edge is thriving—due in no small part to its core values that promote fellowship from within in order to serve the community outside.

“It seems like God has found a place for us,” says Jim Carberry, pastor of Water’s Edge.

Carberry was called to Water’s Edge in 2011. At the time, the church plant was down to about ten people and in need of a renewed sense of vision. Since then, the congregation has grown to about 60, officially organized as a church in the RCA, and has even been named a “member of the month” by the local chamber of commerce. But it took some work to get there—and one of the turning points was to start looking at other attendees as family.

“The bottom line is that because most of us don’t have connections with each other outside of Sunday mornings, we need to create other times when we can be ourselves and share our lives with each other,” says Carberry.

Soon after Carberry arrived at Water’s Edge, a church member felt convicted to invite the church family to her house for a weekly potluck for a month. This small gesture became the basis for their summer fellowship gatherings, which the church has held each week from June through August ever since.

And that was just the beginning. For the past four years, families have hosted tailgate parties whenever the Seattle Seahawks have a home game. (“It’s worked out pretty well since they’ve made it to the Super Bowl two of the four years!” jokes Carberry.) The church throws baby and wedding showers, pool parties, harvest parties, kids’ nights out, and even annual church campouts. Their goal is to have at least one fellowship activity per month, in addition to monthly potluck lunches after the worship service.

Events like these allow attendees to get to know each other better and become more genuine and transparent in their relationships, Carberry says. They also offer an opportunity, outside of Sunday mornings, to show God’s love to those who may not have grown up in the church. Such was the case for a local woman and her three children; they began coming to Water’s Edge services a few years ago but really connected to the church family through fellowship events. When tragedy hit the family last year, their Water’s Edge family was able to surround them with love and support that was desperately needed.

“They … would have been left hurting even more if they hadn’t gotten to know and trust the church through the fellowship activities,” says Carberry. “These events have … allowed us to put away some of the masks and facades that many church people think they need to wear. It also helps us to be more understanding and compassionate not only of each other, but of the imperfect and broken people in our community.”

Understanding and compassion are important to Water’s Edge, since another of their core values is service to the community. From the beginning, outreach has been part of the congregation’s DNA. The fact that they are much more united as a family in that service now makes the work even more fruitful.

“To go to the next level in our faith walk as individuals and as a church family, we need to live our faith the rest of the week together,” says Carberry. “That means getting to know each other well enough and trusting each other enough to give up our time, energy, and resources for a common kingdom cause.”

To live out this value, Water’s Edge has committed to doing at least one community service project each month. They have helped people move, served meals at a camp for people with disabilities, set up events with the county parks and recreation department, and provided Christmas presents to area families. They also keep connected to the community in other ways, such as renting a gymnasium from the parks department for worship space and becoming a member of the local chamber of commerce.

As a result, Water’s Edge, in spite of its small size, has become a go-to resource in Birch Bay.

“In a community where a large majority do not … have anything to do with God, it is amazing that the ‘secular’ groups feel comfortable asking a church for help,” says Carberry. “That is a way the Lord has broken down some of the barriers … all because we’re willing to serve.

“[This work] shows the people of our community that our love for them—and by extension, Christ’s love for them—is unconditional. We do this to meet their needs, not to get anything in return. And the truth is, it has been rare for a service project to bring people to our church. But that’s okay. We do it to help, not recruit.”

Still, transformation has taken place. Once while knocking on doors to collect items for a food drive, Carberry met one of their neighbors, a single mother. When she learned that Carberry was pastor of the church just down the road, she said she might visit. He was skeptical—he’d heard that before. But one Sunday the woman showed up, along with her children, and they all started attending regularly. Then, she invited her next-door neighbors to the church. They, too, stuck around.

What started as an act of service had resulted in the expansion of the Water’s Edge family.

“A year later, we had five baptisms, including this woman’s, and two professions of faith from those three families,” says Carberry, “all because we knocked on a door and asked if she could spare a can of food for the hungry.”

Email local@rca.org to join other churches in finding the best ways to serve your community.

Stretch yourself and invite your church family to a weekly potluck at your house.