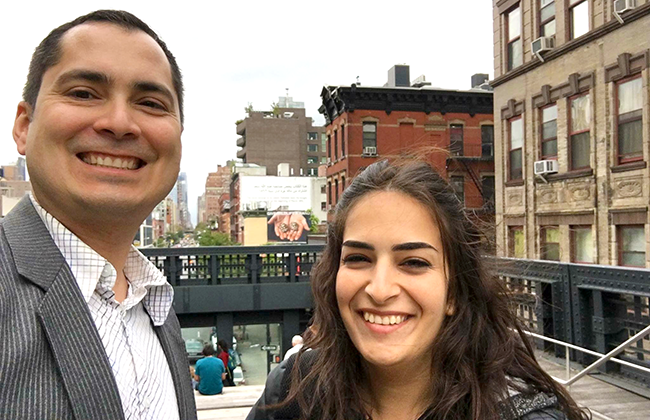 From Stranger to Sister

Home › From Stranger to Sister

How one Palestinian served as an agent of reconciliation

The lights are low in the Brooklyn bar, and jazz fills the space. Salam Qumsiyeh is lost in the music. She loves jazz. The set ends, and the 25-year-old Palestinian, visiting New York from her home in Bethlehem, leans over to talk to the friend she came with. Her friend mentions that one of the musicians, a man about her age, is Israeli. That catches Qumsiyeh off guard.

She can count on one hand the number of times she has had a real conversation with an Israeli. The interactions she has had with the Israeli occupiers of her hometown are more hostile than conversational. But here she is, captivated by this music, delighted.

She decides to talk to him. She explains that she’s here to help a few churches learn about the conflict between Israel and Palestine. He says he has lived in New York City for a long time, making music. She says it’s her first visit. They talk about the conflict and agree that their generation is more open minded than their parents’.

Before he heads back up for the next set, she tells him, “For the first time in 25 years, an Israeli has made me happy!”

Qumsiyeh visited New York last fall at the invitation of a team of people from Woodstock Reformed Church. Pastor Joshua Bode heard of Qumsiyeh through her articles; she’s a journalist and a Christian, committed to educating others about Palestine. The congregation has been working through the Ridder Church Renewal process, which equips leaders to guide their churches through deep change to reach God’s vision for their future. The process expanded their understanding of mission. The team imagined Qumsiyeh’s visit as a kind of reverse mission trip, where she would offer something to their congregation and to four others—First Church in Albany (RCA), Old First Reformed Church in Brooklyn, Trinity Reformed Church in Ridgewood, and First Reformed Church of Schenectady.

Wanting greater understanding, they extended an invitation, and Qumsiyeh came. Getting to the United States was a bureaucratic obstacle course, but that’s typical for her day-to-day life. Because of the Israeli occupation of Palestine, not only did she need to travel to Jerusalem to get a visa to travel to the U.S., but she also needed to obtain permission from the Israeli government to travel to Jerusalem to apply for the visa. And on the day she flew, she had to cross three checkpoints—one Palestinian, one Israeli, and one Jordanian—on her way to the airport because the only way for her to fly to the U.S. is by way of Jordan.

“I’m facing the occupation,” she says about her life in Palestine. “I face it every single day.” She came to the United States to help other people understand her daily realities—the precariousness, fear, and limits.

Qumsiyeh was in New York for a month, visiting the five churches and staying with church members. She spoke about her life in Bethlehem, as a minority Palestinian Christian, and under the Israeli occupation.

Qumsiyeh often encounters the perception that there are no Christians in Palestine. Though their numbers are small—just 2 percent of the population—their presence is real. Qumsiyeh also finds herself having to explain that Palestinians are educated, open-minded people who care about the broader world.

It’s difficult for North Americans to imagine life under occupation, says Thomas Goodhart, pastor of one of the other host churches, Trinity Reformed. “Living under the reality of the occupation is constant and always impinges upon your freedom of movement. … As U.S. citizens, we have great freedom in being able to cross borders. … We all complain about bureaucracy, but it’s much greater there.”

Beyond giving presentations to the churches, Qumsiyeh packed her schedule full. Her hosts in upstate New York took her boating, waterskiing, canoeing, and hiking. In New York City, she learned the subway system. She went to concerts and movies. She ate at nearly every kind of restaurant New York has to offer—Indian, Polish, Chinese, Japanese, Egyptian, Italian, and even American diners.

Even long car rides were novel to Qumsiyeh: “When we would go on a ride for two to three hours, I just loved that because we can travel so far. The space, the forests, the lands—we don’t have that [in Palestine]. I just loved to be in a car and look at everything.”

Qumsiyeh’s visit took a political and cultural abstraction and made it personal.

Since her visit, Goodhart and his congregation pay more attention: “Now we hear about something in the West Bank and we ask, ‘Oh, I wonder how Salam is and how that affects her.’”

Bode echoes that. “It’s one thing to have an academic interest or political interest, but once you start making friends, it’s part of your person now,” he says. “I think about my kids—for it to be normal for them to have someone come to our house who’s from a different country who speaks a different language. It’s such a world-expanding, formational gift.”

For Bode, his congregation’s commitment to friendship with Qumsiyeh is simply being faithful to the gospel.

“It’s rooted in 2 Corinthians—in Christ, God was reconciling the world to himself and has given us the ministry of reconciliation. For me, the fundamental witness that God reveals through the life and witness of Jesus and Scripture … is showing us a God that says fullness of life is about crossing boundaries and finding love.

“[Overcoming] cross-cultural boundaries is important … to live into God’s pattern of salvation and reconciliation.”

Rather than siding with one victimized group, Bode says, “Christians have to find a way where every victim’s story is cherished … I want Christians to show up in the world and show up as catalysts for reconciliation.”

That is exactly what Woodstock Reformed is trying to do. Many Jews live near the church, so the congregation’s love extends not only to their new Palestinian Christian friend but also to their Jewish neighbors. Since Qumsiyeh returned home, members of the congregation met with a local rabbi and continued to learn. Several people keep in touch with Qumsiyeh, and a few are planning to make a trip to visit her.

“There’s an Arabic word, habibti, that means ‘my sister,’ ‘my brother,’” says Goodhart. “By the conclusion of our time, I could clearly say she was my habibti.”

Pray for Qumsiyeh, for the Palestinian Christian community, and ultimately for peace between Israel and Palestine.

Consider how you and your church might take steps to act as agents of reconciliation in the world or in your neighborhood.

Curious about Ridder Church Renewal and the impact it could have on your church? Email thriving@rca.org for more details.