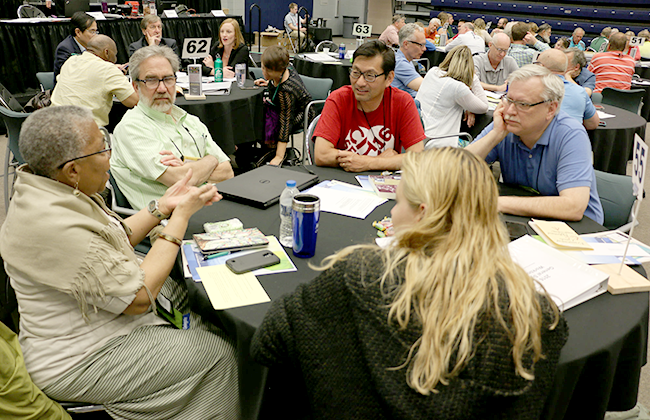 Learn more about what happened at this year’s meeting of the General Synod.

“In the midst of some of the greatest tension in the history of the RCA, we are seeing some of the greatest ministry impact through Transformed & Transforming,” general secretary Tom De Vries told delegates at General Synod 2016. “We have been a denomination that has persevered for almost four centuries—through disagreement, through differences, and through conflict. I believe it is because we are a people who don’t just do church—we understand what it means to be the church.

“Being the church means being more committed to finding God’s solution to our disagreements than making sure our side wins.”

Among the items on the order of business were recommendations from the report of the special council on human sexuality. General Synod delegates adopted as constitutional the “Order for Christian Marriage” liturgy, which describes marriage as “a joyful covenanting between a man and a woman.” The vote elevates the 2002 liturgy to constitutional status if it is approved by two-thirds of the RCA’s 44 classes over the coming year. The decision also needs to be ratified at General Synod 2017. Other recommendations from the special council were discussed at length and not approved.

In addition, delegates called for a change to the Book of Church Order (BCO), mandating that consistories or governing bodies “shall assure that marriages solemnized in a church or congregation are between a man and a woman.” The change must be approved by two-thirds of RCA classes and ratified at General Synod 2017 before it is added to the BCO.

General Synod also passed a resolution to “reject all forms of mockery, degrading words and thoughts, economic oppression, abuse, threats, and violence made against members of the LGBTQ+ community,” regardless of position on the “moral status of same-sex behavior.” The resolution called on anyone involved in such behavior to “repent and immediately begin walking in obedience to Jesus’ command to love.”

In other business, delegates approved synod president Evan Vermeer’s proposal to develop a way for churches that are financially healthy to partner with churches that have fewer resources. The synod also called for a clearer, more seamless path for commissioned pastors to become ministers of Word and sacrament.

Delegates voted to encourage classes to develop family leave policies for ministers to “allow both women and men to share in this caregiving ministry during times of significant life change or upheaval.” And the synod also voted “to declare that the RCA does not support the use of reorientation/reparative therapy but does affirm the power of the Holy Spirit to transform all lives.”

In synod leadership, delegates elected Dan Gillett as the new General Synod president and Lee DeYoung as vice president. They will serve over the coming year, through General Synod 2017.

Throughout synod, delegates and guests worshiped together and heard stories of transformation taking place in churches and in individuals. They celebrated the organization of ten new RCA churches, the generosity of congregations that are missional impact partners, and the debut of RCA Global Mission strategic impact areas.