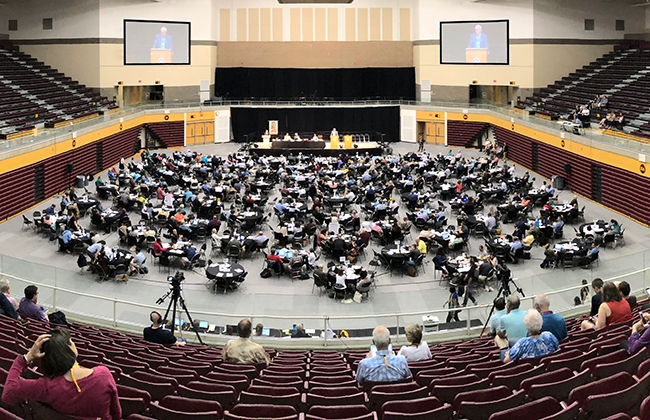 The group is exploring three possible scenarios for the RCA’s future—staying together, radical reconstituting and reorganization, and grace-filled separation. Interim general secretary Don Poest proposed the 2020 Vision Group in his report to synod, following a year of observations from across the denomination. The vision group will present its recommendations to General Synod 2020. What they recommend could bring some big changes for the RCA. Poest’s advice for what to do in the meantime: “Take a nap,” trusting that while you rest, God will still be working.

The We Are Speaking statement calls for an end to sexual abuse and violence against women and girls. More than 800 RCA members have signed it.

“For far too long, women and girls have been victims of harassment, abuse, and sexual violence rather than being treated with the dignity God intended for them,” the statement reads. “These people have not felt safe to share their stories because of the very real fear that their lives would be destroyed by those in positions of power. … We in the church are obligated to listen and respond.”

You can read the full statement and add your name to it at www.rca.org/wearespeaking.

The catechism consists of 19 questions and answers and is written in a conversational format similar to the Heidelberg Catechism. It addresses questions like, “Is human sexuality a good thing or not?” and “Since marriage and family are good, is it necessary to be married?” Synod commended it to RCA churches and classes and the Commission on Theology for study, reflection, and response.

Read the catechism at www.rca.org/glcatechism.

Synod by the numbers

Eddy Alemán was installed as the new general secretary of the RCA, the first Hispanic and first person born outside the United States to serve in the role. Read more of his story at www.rca.org/eddy.

James Nakakihara, a Japanese American, was elected president of General Synod 2019. In a short acceptance speech, he shared how he has always looked up to his great uncle, who, after his release from an internment camp in California, volunteered for service in the U.S. military. While leading a group of soldiers in Italy during World War II, Nakakihara’s uncle jumped on a grenade and was posthumously awarded the Congressional Medal of Honor for his heroism—becoming the first Japanese American to receive the award. “I always thought, I’d sure like to do something special [like that],” said Nakakihara. “You’ve helped me to fulfill that.”

The RCA and CRC concurred—in more ways than one. The two denominations held concurrent synods this year, coming together several times during the week. In a discussion about future partnership, delegates concurred again: they want to do even more together in the future.

How would you caption it? We asked our Facebook followers to caption this photo of interim general secretary Don Poest at synod. Here are a few favorites:

—Rev. Dr. Andrea Godwin-Stremler, reflecting on her path to ministry in the #sheiscalled video

General Synod 2018 celebrated the 40th anniversary of women’s ordination as RCA ministers of Word and sacrament. Watch the #sheiscalled video to hear how women all over the RCA have been called to lead the church at vimeo.com/rca/sheiscalled.