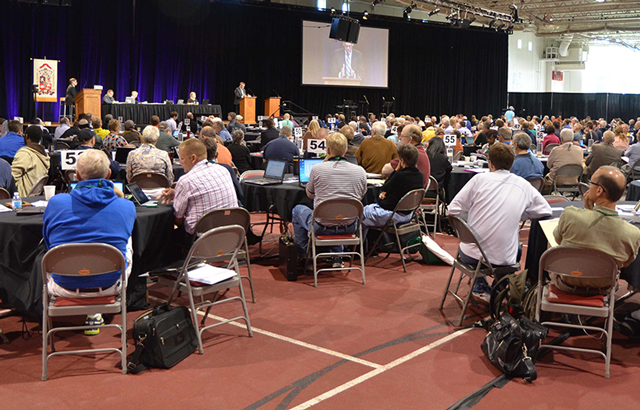 In advance of two General Synod reports addressing human sexuality and same-sex relationships that are anticipated in 2015, delegates on Monday instructed the Commission on Church Order to begin the process of incorporating a definition of marriage as between one man and one woman into the Book of Church Order (BCO).

The recommendation was a response to an overture from Zeeland Classis seeking to give clear constitutional authority to “our approved liturgies for marriage, the actions of General Synod, the teachings of Scripture, and the declarations of church order.”

In its response to the overture, the Special Advisory Committee on Overtures and New Business called for the Commission on Church Order to bring a recommendation that can be voted on at next year’s General Synod, in conjunction with reports from the Way Forward Task Force and the Commission on Theology. (That work began following General Synod 2013.)

“The recommendation does not say to put it in the BCO, but to look for ways it might be put in the BCO,” said Evan Vermeer, a delegate from the Regional Synod of the Heartland and a member of the advisory committee that made the recommendation. “There’s a great number in our membership looking for a statement on this issue, and we believe this [Church Order] report would fit nicely with next year’s agenda.”

“If a definition is not clearly written, ambiguity and lack of clarity will open door for other interpretations,” said Mike Van Buren from Zeeland Classis.

Several delegates spoke in favor of waiting until next year to make a decision about whether to add a definition of marriage to the BCO, while others said such a definition is outside the purpose of the BCO.

“Four years ago synod denied an overture to do this, saying the BCO is not the place to address it,” said Josh Bode, corresponding delegate from the Commission on Church Order. “The church order doesn’t address ethical issues at all—cohabitation or divorce, for example—and it orders church discipline, not through regulation, but in gathering office bearers in how to proceed. I speak against the recommendation based on a Reformed doctrine of the church.”

“Even though I agree with content of the recommendation, the BCO is not the place for it,” said John Yates of City Classis.

“This is a measured response that allows another General Synod to vote and do the work that needs to be done,” countered Jeremy Visser of Zeeland Classis. “And, it’s a unifying response, one that unifies the theology of the global church and the history of church.”

The recommendation was approved 121-98.