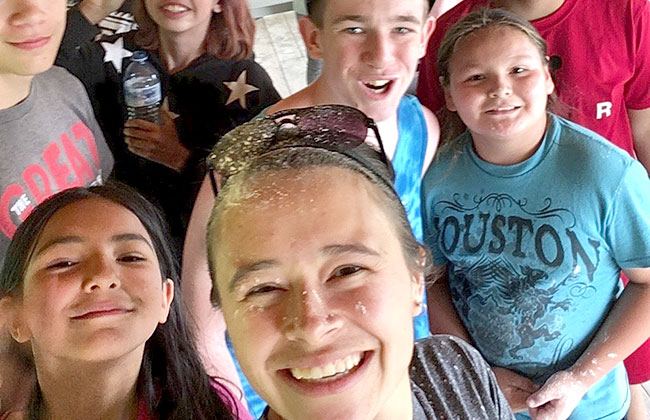 Hearing the Call of God at Calling Lake

Home › Hearing the Call of God at Calling Lake

Ashley Stad works with youth as part of Athabasca Reformed Congregation’s ministry among the indigenous people of Calling Lake.

If you have lived in or traveled through Northern Alberta, you know it is a ruggedly beautiful place. The wide, low sky is a constant reminder that God is vast and near. When the wind whistles through winter fields and northern lights sing across cold night skies, I am sure I can hear the Holy Spirit’s call.

Members of Athabasca Reformed Congregation (ARC) also know well the call of the Spirit. I first heard about the church through mission reports of their Calling Lake ministry, which is supported by the Regional Synod of Canada and serves the Cree community. The town of Calling Lake sits on the shore of the lake of the same name. It is 60 kilometers north of Athabasca, Alberta, 300 kilometers south of Fort McMurray, and is the seat of the Jean Baptiste Gambler Reserve 183 of the Bigstone Cree Nation. But beyond that, I didn’t know anything about Calling Lake—or Athabasca for that matter—and I hadn’t the faintest idea what had brought the two together.

It took a visit to the delightful Athabasca congregation to learn that the church was founded in 1991 by Rev. Don Crowhurst. Over the years the congregation worshiped in several spaces, including the local theatre, before settling into their current building, a former nursing home. The building sprawls in a circle around a central grassy courtyard and includes several guest rooms—relics of the place’s former purposes but still well used for hospitality. It is perched on a rolling hill frequented by deer herds, with a fire pit out back and a fine view of the city. Worship services are vibrant and intimate, usually involving an extended greeting time beforehand, excellent preaching, and fellowship over food afterwards.

During a visit to ARC I learned that the Calling Lake ministry began in 1998, when Larry and Laura Zornes felt called to lead the Calling Lake Sunday School project, an outreach to the First Nations community. Robert Westra’s historical book, Turning Points: Twenty-Five Years of the Athabasca Reformed Congregation, explains that the Zornes started with a group of 12 church members and drove to Calling Lake every other week to teach Sunday school.

They later moved the program to the Community Complex so they could meet regularly, one Christmas hosting more than 100 people. Vacation Bible school also became a regular summer activity assisted by youth group volunteers, with children sometimes numbering more than 100.

In 2012, Rev. Al Plat was called to Athabasca and, in 2014, ARC went through a visioning process, led by former regional synod executive John Kapteyn, in which they discerned three areas of congregational passion: youth, the Calling Lake ministry, and discipleship. In response to the call they sensed in these three areas, the church created a youth and outreach worker position, filled first by Maria Toews (who also represented the regional synod on the Canadian Aboriginal Ministries Committee, and attended General Synod as a youth delegate) and then Ashley Stad.

Ashley shared with me recently how her own life story has shaped her call to ministry. She celebrates her indigenous roots, while lamenting a family history of alcoholism, adultery, abuse, divorce, and frequent moves.

Ashley says, “Needless to say, it has not been the easiest journey. I find that having genuinely found Christ in grade ten at an ‘Athletes in Action’ soccer camp allows me to relate to teenagers in very unique ways. I’m honest about my past and my struggles and yet I’ve also wrestled to find God within my past although I trust and believe he’s there. Being real about your faith is incredibly important to me, as well as having compassion for those who mess up. Coming to understand how God sees me has drawn me towards himself, time and time again.”

Ashley recently felt a call to attend Canadian Lutheran Bible Institute and balances her studies with work at the church. She dreams of seeing greater parental engagement in Athabasca’s youth ministries, greater local leadership from within the Calling Lake community, and more intentional follow-up to vacation Bible school programs. For her own part, Ashley hopes to become a police officer with a focus on the downtown core so she can work with people who are homeless and who struggle with addictions. She also feels a call to build deeper, reconciled relationships with her family of origin.

When I consider these things, I marvel at how the call of God has spilled out into so many lives through the relationship between Athabasca Reformed Congregation and the Calling Lake community. And I wonder how many more people will hear the wild call of the Spirit through reconciling partnerships like this one.

Marijke Strong is executive secretary of the Regional Synod of Canada.