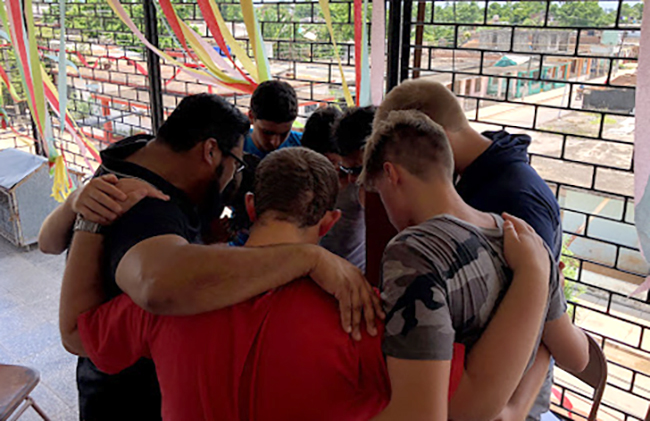 After diplomatic relations were reestablished between the U.S. and Cuba, 21 high schoolers were among the first RCA volunteers to serve the island nation.

“A few years ago, God put on my heart Cuba,” says Jeff Fernandez.

Cuba was already in his blood; Fernandez’s father was born there and made it out after Fidel Castro came to power in 1959.

But even with the family history, there was something new and persistent about this calling, and diplomatic relations between Cuba and the U.S. had officially reopened in 2015 for the first time since 1960. Fernandez, who is director of student ministries at The Bridge Ministries (RCA) in Portage, Michigan, reached out to the RCA. Was anything being done in Cuba?

He connected with Luis Ruiz, supervisor of RCA mission in North America, Latin America, and the Caribbean. The RCA has worked with the Christian Reformed Church (CRC) in Cuba since the 1990s, Ruiz says, supporting relief efforts and working alongside CRC pastors to preach the gospel to people living on the island.

This was not a mission trip in the traditional sense of the term. “This was a very different style of a mission trip,” Fernandez says. “We never swung a hammer. We never dug a ditch. We didn’t build anything. It was 100 percent relation-based ministry.” After more than 50 years with such limited contact between people in Cuba and people in the U.S., building relationships was key. It also fit with the student ministries program at The Bridge. “We teach and train our students that they are ministers of the gospel of Jesus Christ right where they are,” Fernandez says. “It’s a different model than youth group in that our students are ministers. … In teaching and training our students in this way, it has brought our students into such a depth of their own faith that we now have a student leadership team. Our students do a lot of teaching.”

The students put that into practice in Cuba, leading a camp for fellow high school students from the local CRC the group partnered with in Jaguey Grande, Matanzas. Fernandez started the week with an overview of the history and context of 1 Timothy 4:12, then five students from The Bridge spoke on what life is like as leaders being an example for believers in speech, life, love, faith, and purity. The students also ran morning devotions and the evening wrap up. “Our students spoke masterfully,” Fernandez says.

One moving moment on the trip came when the Cuban camp director was running late, says Fernandez: “She came to our 9:00 p.m. meeting late, apologizing. She was in a meeting with her students. The girls were unpacking and unloading, which was new for them. A few of the girls were hurting, physically and emotionally. The girls said, ‘We should start praying; we’ve seen the Americans do it.’ They were in an impromptu prayer meeting, with the girls laying their hands on each other and praying for each other. She glanced at her watch, and two girls saw it and told her to go to her meeting. She said, ‘No, this is more important.’ But this is where the leadership [that they had learned by watching The Bridge students] took over. Her students looked at her and said, ‘No, we’ve got this. You go to your meeting. We’ve got this.’ We were crying when we heard that, tears of joy.”

The group also worked with OSCO (translated, roughly means Deaf Ears, Hearing Hearts). “Our students wanted to work with that ministry; OSCO wanted to work with them,” says Fernandez. Like The Bridge, this ministry has a very student-focused ministry, equipping students who are deaf to minister to other people who are deaf. “In Cuba, the Deaf are looked at as 12th class citizens, not thought highly of at all,” Fernandez explains. “To have us come in and do life and train was a beautiful win-win. Our students got to be a part of that. Something special.”

Logan Deluca, a high school junior, says a favorite part of the trip was seeing the impact. “It was a good opportunity to help my faith by helping others in their faith, and either help them continue their journey or help them start their journey with God.”

Fernandez agrees, “The kids that went, they will give testimony about how life-changing the trip was, how impactful it has been, and how it continues to shape them and grow their faith.”