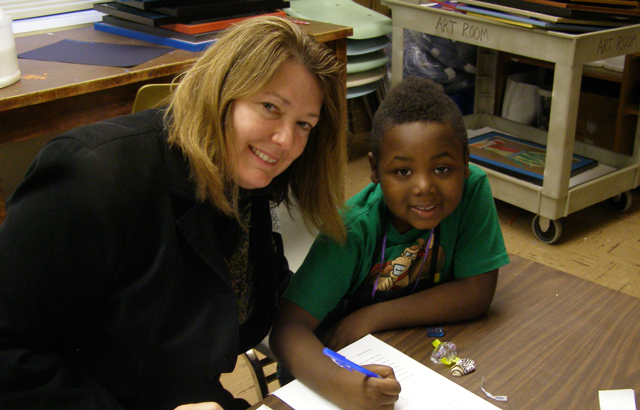 Planting churches was just the beginning—a way to create “strategic beachheads with a 24/7 presence” in Wyoming, Michigan, a bedroom community of Grand Rapids. Once a stable blue-collar town, Wyoming has fallen on hard times with the closing of several big factories.

The RCA worked in partnership with the Christian Reformed Church to start seven churches that would focus on their neighborhoods, all under the “One Wyoming” banner.

But it wasn’t enough.

To get at the heart of the need, the One Wyoming leadership team asked local civic and business leaders about their most pressing concern for the area. “Poverty,” they said.

Poverty stemmed from unemployment, which in turn was rooted in people’s lack of education, says Randy Weener, classis leader for South Grand Rapids Classis. Low graduation rates led to the identification of a basic need: help students stay in school and be successful.

“Kids who are raised in poverty don’t have many dreams,” says Weener. “And just to help them see what gifts they do have is important.

“It’s even better if we can inspire them to graduate and even go on for more education.”

An ambitious mentoring program was created. Called “One Wyoming 1 on 1,” it’s working to pair 10 percent of Wyoming’s 11,000 K-12 students with adult mentors. Each mentor commits to one student for one hour a week for one year.

With four separate school districts in Wyoming, it was important to set up a city-wide organization that allowed the mentor to follow a student from school to school.

“Thirty percent of the students move during the school year,” says Weener. “Our system allows mentors to seamlessly move with them.”

Launched in fall 2013, the program has already paired more than 400 adult volunteers with students. This successful start was helped by local organizations such as the United Way, Kids Hope U.S.A., and Grace Bible College, which committed its entire freshman class as mentors.

“Helping another person reach maturity is one of life’s great opportunities, and One Wyoming 1 on 1 provides that chance,” says Sam Wright, superintendent of the Kelloggsville school district.

“My mentor is a great help with school problems as well as home problems,” one student wrote. “It’s like I can go to him for anything without being uncomfortable.”

“Me and my mentor play games, go on the computer, make bracelets, and sometimes we just talk about life,” says another student. “Mentors and mentees can talk about anything they want and the mentor will not tell anyone.”

Another student says of his mentor, “He helped me with my grades, and at the end of school I got all A’s.”

A parent survey showed that after a year of mentoring, kids seemed more positive and were better behaved at home. They worked harder on their homework. They had better attendance at school, had a better attitude about school, and did better in school. One parent reported that her daughter has decided to go to college and become a teacher.

And students aren’t the only ones whose lives are being transformed.

“Stories are coming back from mentors that their lives have been impacted in a major way,” says Jack Ponstine, the volunteer coordinator for One Wyoming 1 on 1. “Our long-term view will see what God has in store for this movement of mentors in Wyoming schools.”

One Wyoming’s church plants are also participating, with pastors and new church members becoming mentors for students in their neighborhoods.

“This is the way God has chosen for us to have the kind of impact that churches really should have,” says George Grevenstuk, pastor of Connections.

“Churches don’t belong in the school, but the church’s people do,” Grevenstuk says. “When individuals believers come together and come alongside these kids and develop long-term relationships with them, that’s going to have a long-term impact.”

“We are connecting with our neighborhood with great impact,” says Rob Holland, pastor of Lifeline Community Church, which launched in October 2013. “All of the 15 families who worship with us regularly from our neighborhood were not attending a church prior to coming to Lifeline Church,” he adds. “We have had several families in the neighborhood comment about how thankful they are that a new church started in the Rogers Heights neighborhood!”

“In that first school year I found so many kids that had no relationship with God whatsoever,” says George Grevenstuk, the pastor of Connections. “I was able to lead nine kids to a relationship to God through Jesus Christ just through the after-school program. That’s neighborhood kids. So I thought, ‘The whole neighborhood has to be like that.’”

He was right. Demographic studies showed that 60 percent of the people in the neighborhood were not going to church. After discussing options with the leadership at Grace, Grevenstuk was invited to start a neighborhood church for folks who don’t come to church.

After a series of prayer walks, the new church also committed itself to inviting people with disabilities to their programs. These days around 40 percent of participants in their evening programs have a disability, although only 16 percent of people in the neighborhood do. “When we began to open our doors and hearts to people with disabilities they just started coming in,” says Grevenstuk.

A third church-plant model can be found in the former New Life Reformed Church, which closed its doors on December 1. The building is now used by a trio of ministries: The Branch, a church started seven years ago, a new Spanish-language church plant, and a growing ministry to Christian refugees from Nepal.

Pray for the children and mentors in the One Wyoming 1 on 1 initiative.

To talk to someone about starting a church, email multiply@rca.org.

For ideas about increasing your impact on your community, email local@rca.org.