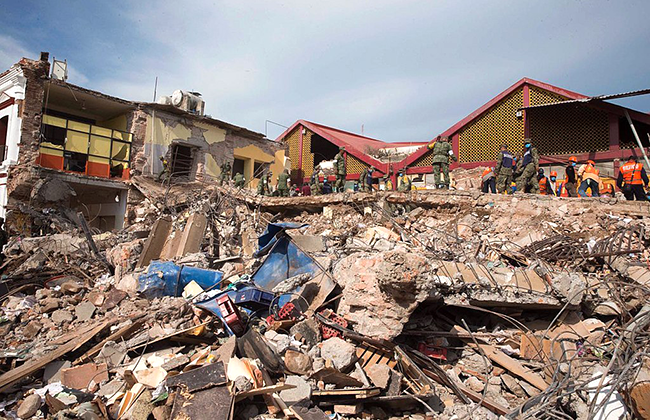 How the RCA Is Responding to Earthquakes in Mexico

Home / How the RCA Is Responding to Earthquakes in Mexico

Just 11 days apart, Mexico was hit with two powerful earthquakes, which killed and trapped hundreds of people beneath the rubble of toppled buildings.

Just 11 days apart, Mexico was hit with two powerful earthquakes, which killed and trapped hundreds of people beneath the rubble of toppled buildings.

On September 8, an 8.1-magnitude earthquake hit southwestern Mexico off the coast of Chiapas. It was the second strongest earthquake on record in Mexico. More than 40,000 homes were damaged in Chiapas alone, and more than 90 people were killed.

Then, on September 19, a 7.1-magnitude earthquake struck central Mexico. People had just 20 seconds’ warning before it hit, causing the collapse of more than 40 buildings. As of September 22, more than 280 deaths have been attributed to the second quake.

Luis Ruiz, supervisor of RCA mission in North America, Latin America, and the Caribbean, is in contact with RCA partners on the ground about how the denomination can support Mexico’s recovery.

The National Presbyterian Church in Mexico, an RCA mission partner, is already distributing basic need kits with essentials like food, water, and clothing across southern Oaxaca and Chiapas. RCA missionaries Martha and Jaime Amaro, who work out of Oaxaca, one of the areas hardest hit in the first earthquake, are coordinating relief efforts with the Oaxacan presbytery.

“Our partners are finding that the long-term solution for water is going to be biggest issue,” says Ruiz. “Right now, people’s immediate needs are being met, but they are realizing that water security is going to be a major challenge going forward, particularly in areas that already had problems with getting clean water.”

“The Amaros will be letting us know the exact needs on the ground so that Aqua Clara can make an assessment,” Ruiz says. “After that is done, Aqua Clara will make a recommendation for what kind of water system could be used to meet the long-term needs in Mexico.”

“What the RCA does well is work with our partners in the aftermath of a disaster,” says Ruiz. “The benefit of having these long-term relationships is that they allow us to go deeper to address the systemic issues that occur after a disaster.”