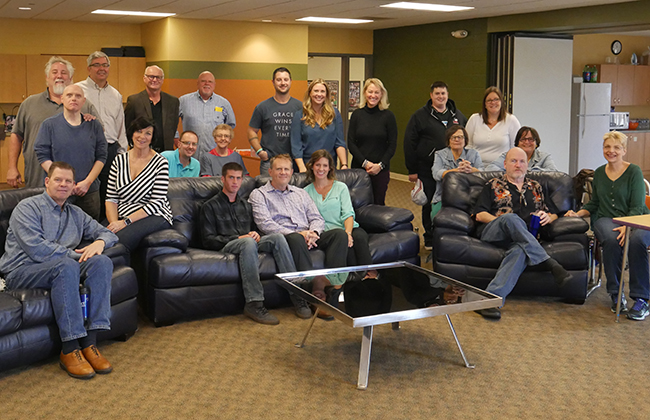 “I Was in Prison and You Visited Me”

Home › “I Was in Prison and You Visited Me”

How one missional community is loving the teenagers at a local detention center.

Three years in, the volunteers from Christ Community Church (RCA) know what the young people they spend Thursday evenings with will want to do: play dodgeball, eat snacks, and often, share deeply.

“Sometimes the kids just want to be heard. In a small group setting they get attention they don’t get anywhere else,” says Kristin Coleman, one of the volunteers from Christ Community. “They want to tell their story. We tell them that they’re loved and that they’re heard, and that their life matters.”

At a juvenile detention center on Chicago’s South Side, these conversations spool out week after week between incarcerated urban teenagers and adults from the church in suburban Lemont, Illinois.

The facility’s residents, most aged 15 to 17, are there for a range of reasons—some for drug offenses or gang activity, or for felonies for which some will serve long sentences in adult prisons after they turn 18. Others are simply homeless and are housed at the detention center while a state social service agency arranges homes for them on the outside.

“When you think of an inmate or a prisoner, you think of a big burly guy,” Kristin says. “One of the most shocking things for me the very first time I went into the prison—looking at their eyes, they’re really just kids in lock-up who didn’t have the same opportunities I had growing up, and they’re suffering for it.”

In 2015, she and her husband, Eric, teamed up with five others from their church to launch a ministry that has grown into a missional community of 25. (A missional community is an oversized small group in which people come together around a shared interest in ministry in a particular place or to a specific group of people.) Partnering with the faith-based agency Chicagoland Prison Outreach, they spend every Thursday night with young residents of the detention center playing games, breaking bread, offering Bibles, and breaking into small groups for a lesson and conversation.

“A few volunteers will be off to the side, available for prayer with individuals. It’s been incredible how many kids have come to Christ with us in that moment. We’ve seen well over 350 inmates, and we’ve seen dozens and dozens of kids come to Christ with us. The officers tell us the changes they’ve seen,” Eric says.

When the Colemans attended an informational meeting at Christ Community Church a few years ago, the last thing they had in mind was stepping into leadership roles for a new local ministry. She’s a nurse. He sells truck supplies. They have three young kids. But they listened, they asked questions, and before long, they interviewed with Chicagoland Prison Outreach and were approved as volunteer coordinators of the new program. The agency has worked since 1994 with adult inmates and was looking for a church with which to pilot a similar program for children and youth who are incarcerated.

Members of the missional community meet with one “pod” of residents a week—a group of about 15. Recently, the center’s population has hovered between 30 and 40, and the volunteers see each pod about every three weeks. The average stay is one month, so they meet some kids just once or twice. With those who serve more time there, relationships develop. “They’re always surprised when church folks remember their stories and names,” Kristin reports.

Not every person in this missional community visits the detention center. There are other roles to fill, like ordering books, organizing a school supply drive for residents’ siblings, or buying and wrapping Christmas gifts for those siblings and delivering them to their homes. The youngest participants are in their early 20s; the oldest, 90.

“Even if you can pray for the kids once a week, you’ll be part of the community,” Eric says.

There are five missional communities like this within the Lemont congregation. Others focus on issues such as disaster relief and human trafficking. Each one is allied with at least one nonprofit, although that’s not required. While continuing its small groups and Bible studies, the church introduced the missional community model in 2014 as part of a new outreach strategy.

“We scrapped our approach to doing mission to try to find one that could engage with people’s day-to-day lives while still maintaining some of our global partnerships,” explains Chad De Jager, the church’s teaching pastor.

“If you generate interest and energy and commit to doing something that you believe God would want us to do, then you have a missional community,” he says. “You have to rethink the way you do mission. It’s beyond writing checks and voting for approval. It’s forging partnerships.”