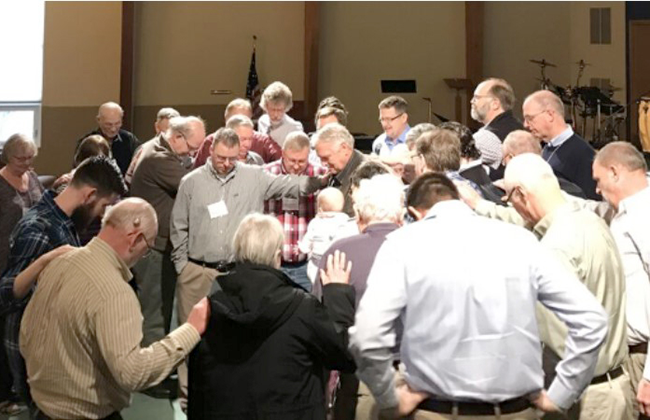 Churches in the Classis of Illinois have suffered from a distance-related disconnect.

The 22 churches are spread over 60,000 square miles. Many of them are in Illinois, several are in eastern Iowa, and one is in the greater St. Louis area. Most represent small (and shrinking) rural communities, with a few large urban areas in the mix. Meetings rotate between three regions within the broad area, but it’s a challenge for pastors to think, act, and imagine as a classis.

Scott Stephan has been the pastor of Second Reformed in Fulton, Illinois, for 12 years. He has watched the classis struggle and has believed, along with other pastors, that hiring a classis leader could make a difference. As the outgoing classis president last year, he stepped into leading the revitalization team, and has helped make that vision reality.

Two others shared his vision: Chad Schuitema and Wayne Van Regenmorter. Both work for the Regional Synod of Mid-America—Schuitema as administrative and ministry leader and Van Regenmorter as visionary leader. In early 2017, they helped fund the first three years of a part-time position for the classis. They also knew of a potential candidate for the job, Ray Tilstra, who retired in 2016 after serving the RCA in the Midwest for 42 years, including as classis president. Tilstra and his wife had relocated to DeKalb, Illinois, to be close to their son and his family—a spot that put him within an hour’s drive of most churches in the classis. After interviewing with the revitalization and executive teams of the classis, he came out of a very short retirement to accept the pilot position in April 2017.

“I’ve been around long enough to know there’s no such thing as part-time ministry,” he says, chuckling, “but I’ll just give the time I can and join God in what he’s already doing. The needs here are vast and varied, and we don’t understand instantly what should happen. We have to be on God’s page and not our own.”

Currently he is getting to know each pastor, pastor’s family, and church. Further down the road, his vision is to provide continuity in the changing landscape of classis operations and to help bring health and vitality to individual pastors and congregations who suffer, as do many, from a culture of fear, anxiety, and overcrowded schedules.

Stephan and Tilstra both understand the challenges facing shrinking and aging rural communities and acknowledge there will be difficult conversations ahead. But they also talk of God having important work for each church to do.

“I believe in the value of goal setting and vision rather than letting our circumstances dictate us,” says Stephan. “There is opportunity for every single church to be doing something to impact the kingdom of God. The question is, ‘What does faithfulness look like for us in our context?’”

Tilstra adds, “We need a new paradigm if there’s going to be vital ministry in these communities. We won’t have the luxury of being independent churches that can thrive alone—we will need to work together.”