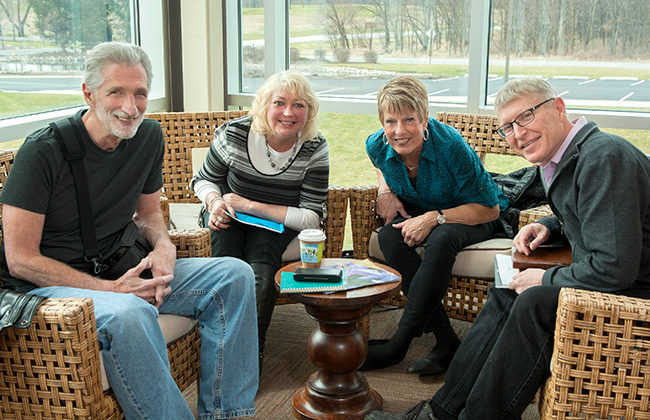 You might think a ministry for people with life-threatening illnesses would be a somber gathering. But that’s not the case for Overcomers, a ministry of Faith Church (RCA) in Dyer, Indiana.

You might think a ministry for people with life-threatening illnesses would be a somber gathering. But that’s not the case for Overcomers, a ministry of Faith Church (RCA) in Dyer, Indiana.

Marlys Iperlaan, one of the leaders of Overcomers, knows that neither wishful thinking nor funeral planning is the answer. Instead, she says, each person has purpose right through to the end: “God knows our beginning and end, and we can’t sit here and worry about it.”

Since August 2016, Overcomers has provided a space for critically ill patients and their caregivers to come together twice a month for devotions and small groups. Between 20 and 40 people come regularly—a third are from the church, a third are from other area churches, and another third have no church affiliation at all.

To allow for freer conversation, patients and caregivers meet in separate small groups. Sometimes the gatherings include guest speakers or holiday events. At Thanksgiving, about 60 people came to the white-glove dinner served by elders and deacons from Faith.

Overcomers was launched after a three-year incubation in the heart of Faith member Darcy Krygsheld, who thought, prayed, and talked with others about a place where people with critical illnesses and their caregivers could share their journeys and find spiritual sustenance. Krygsheld herself is fighting stage four colon cancer, which has metastasized to one lung, and longed for such a place.

It wasn’t until Iperlaan shared her own testimony about ovarian cancer one Sunday morning that the ministry began to take shape. Krygsheld and Iperlaan forged a bond and then enlisted the help of Andy Nearpass, Faith’s care pastor, and Bill Van Kley, an elder at one of Faith’s seven campuses. The four of them make up the leadership team.

Van Kley also knows about life-threatening illness, since he suffers from congestive heart failure. For the past year and a half, his left ventricle has gotten help from a pump with a line into his aorta. But, thanks to Overcomers, his spiritual life has been reinvigorated.

“We get really close to each other,” he says. “Being serious about the God stuff is the cool part. If [group members] weren’t serious before, they are now. There’s an urgency in my life that wasn’t there before.”

Senior pastor Bob Bouwer helped give the group momentum, asking them to kick off just a month after they first sat down to discuss a potential ministry.

“Once I heard of the dream, my heart exploded with passion and joy to reach out to those who are facing life-altering or terminal illness and their families,” Bouwer says. “The call of Scripture is evangelism and discipleship, and this wonderful ministry is addressing both at the same time.”

The Overcomers team is excited about people coming to Christ as well as growing in their faith.

“We’re not here only to love and encourage, but, much deeper, people must know that they have a choice between Christ-less and Christ-filled eternity,” says Iperlaan. “Our time is short, and we want folks to know that as long as their toes wiggle, they still have purpose in the kingdom. We’re not done until we see our heavenly Father face to face.”