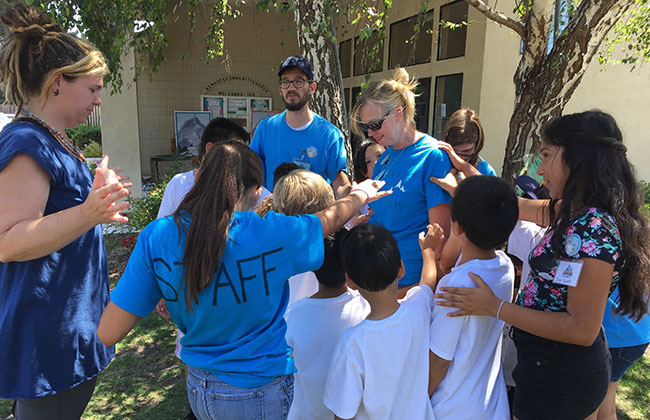 It’s Not about the Numbers

Home / It’s Not about the Numbers

How the Congregational Vitality Pathway helped New Hope Community Church focus less on the number of people in the pews and more on their spiritual health.

New Hope Community Church was so worried about filling its pews that it lost sight of its mission.

A committee spent two years debating how to repaint the sanctuary. And this was just one example of the growing turmoil at New Hope Community Church (RCA) in Fremont, California.

A beloved founding pastor retired after 30 years of preaching. In the transition, the congregation dwindled to 40 or 50. Those who remained were aging and bore little resemblance to the increasingly diverse community around them. The church was running out of funds.

“Giving was down, and we still had a mortgage and pastor to pay. We weren’t making it,” longtime member Carol Siacotos recalls. “We were about six months away from running out of money, so we asked, ‘Were people wanting the church to move forward, or did we need to consider merging with another church, or even closing?’”

Around the same time, the congregation’s new pastor, Steve Norman, heard about the Congregational Vitality Pathway, a process that helps churches become healthy and missional, at a classis meeting.

“We thought, hey, maybe this is what we need to do. So it came at the right time,” Norman says.

Siacotos helped Norman design a questionnaire to gauge the congregation’s interest in moving forward with the pathway.

“We did about 45 interviews, and there was great support. People wanted to move forward. They just didn’t know how,” Siacotos recalls.

So New Hope began the Congregational Vitality Pathway in early 2013. The process challenged the church to take a hard look at its ministry.

“We realized that we were not a healthy or missional church,” Norman says. “I think a lot of churches, when they’re failing, you just want to grow, but if you’re not healthy and missional, then you don’t grow…With the pathway, we really started to focus on, ‘Why are we here?’ We got to thinking, ‘What does it mean to be the body of Christ? How do we follow Jesus more intentionally?’”

New Hope began to focus less on the number of people in the pews and more on their spiritual health. Discipleship triads—groups that meet once a week for a year to talk about spiritual disciplines, discuss how God is working in group members’ lives, and study theology—have been foundational for this new ministry approach.

Triads “cover Bible teaching, community building, and spiritual disciplines,” Norman explains. Each group is assembled by a person who has been through a triad before. And when you finish a triad, “the challenge is that maybe God is calling you to start a triad,” says Norman.

The triads bring participants back to the basics of their faith. This was particularly meaningful for Siacotos, who had grown up in the church but stopped going after high school. When she started coming to New Hope 20 years later, her faith was still very young.

“The first verse we read, at first, I thought, I’ve read this a million times, but no—I’d never thought about it at that level. So it was really good to reexamine my beliefs, to get reacquainted with the Bible, God, and who God is. It was a great way to grow on a personal level,” she says.

Siacotos isn’t alone. This return to the core tenets of faith has had a powerful spiritual impact on many members of New Hope.

“Folks that didn’t pray in public now pray in public. Folks that would never—we would ask them [to] be on consistory, they would say no. Now they’re saying yes,” Norman says. “Leadership has grown in people I wouldn’t have expected.”

Norman says that after participating in a triad, one person reflected, “I’ve been going to church my whole life, but never really put the meaning of the gospel together. It’s like I was eating at a smorgasboard for years, but rarely had complete, healthy meals.”

The triads were a chance for this person to a “hunker down for a year and figure it out,” says Norman.

As New Hope members were strengthening their personal faith, the vitality pathway was also helping them form a stronger, healthier community as a church.

“Our church had a culture of being a little negative and inward-focused,” explains Beverly Day, who played an active role in New Hope’s revitalization. “We have worked on how we communicate and how to have more grace with others as we all work on our own baggage. We have become more open in sharing our own stories and accepting others. There has been a lot of community building.”

Now New Hope is turning its focus outward to connect with its diverse neighborhood. While this has been a challenge, Norman says the congregation is making progress.

“We’ve made some inroads—we do have a Malaysian family, an Indian family, and an African American family, but we still have a ways to go before we look like Fremont.

“In the pathway, we talk about being healthy and missional. I think our congregation is much healthier than we were. Now we’re working on the missional part,” Norman says. “It’s like falling in love with Jesus and now learning to love what Jesus loves.”

The Congregational Vitality Pathway was so powerful at New Hope, both Norman and Siacotos are now helping other churches in their region go through the process. Norman is co-director of the process for the Far West region. Siacotos directs the pathway assessments for the region.

To explore the Congregational Vitality Pathway for your church, email thriving@rca.org.

Pray for members of your church family to grow personally and as a congregation.

Donate to the RCA Ministry Fund to support initiatives like the Congregational Vitality Pathway.