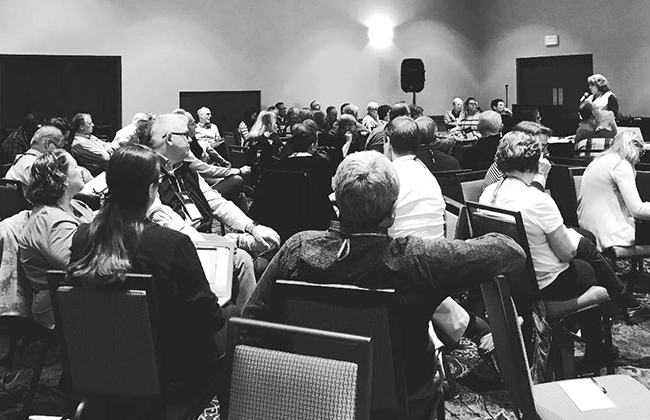 Recognizing your part in the situation is the first step, attendees were told at a recent training.

Last month, 94 RCA leaders met for a time of introspection.

They had gathered to learn about leading through change; the work involved self-reflection and solitude.

The event, hosted by the executives of the RCA’s eight regional synods, was held in Phoenix, Arizona, January 22–23.

The Council of Synod Executives (COSE) holds a leadership training every other year. When COSE began to plan this event, they talked about what the RCA needs right now, says Marijke Strong, regional executive secretary for the Synod of Canada. “Overwhelmingly, the conversation was around helping people with the skillsets they need to navigate change,” she says. “Our denomination is going through change, and there’s anxiety in the system, and people are unsure about the future. We asked ourselves, what kind of gift could we give to leaders in the RCA that would help all of us lead through this particular moment well?”

That, she says, brought COSE to Jim Herrington and Trisha Taylor.

Taylor and Herrington are authors of The Leader’s Journey and are well-known in the RCA for their involvement in Churches Learning Change, previously Ridder Church Renewal. They led the two days of learning, which were focused on emotional maturity, managing conflict, and leading through change. Throughout the training, Taylor and Herrington lectured, directed small group conversations, and provided participants with structured solitude to reflect on a challenging situation in their own lives.

For Sherri Meyer-Veen, a pastor in upstate New York, and Pete Burrill, a pastor in Ontario, recognizing their role in challenging situations was a revelation.

Listening was the big message for Ned Beadel, a retired pastor and member of the General Synod Council.

AnnAlissa Lamers, data manager for the RCA, learned something valuable for her relationship with her nine-year-old son.

“We all picked a different situation in our lives that we were working on [there], but that’s going to have ripple effects everywhere we go,” Strong says.

Strong says a highlight was seeing so many people have “aha moments” and hearing afterward that many participants were able to immediately use what they had learned in Arizona. “I heard firsthand from some people who said, ‘I went to a consistory meeting two days later, and I was able to show up differently in that meeting and to tell people what I learned.’ They’re choosing to operate differently, and they’re inviting other people into that journey as well.”

In a survey of participants, 75 percent of respondents replied that within two weeks of the event, they had already used something they learned.

As the denomination awaits next year’s recommendations from the Vision 2020 Team about the future of the RCA, Strong is hopeful about trainings like this. “The more we can all grow our spiritual and emotional maturity, whatever decision we make, the more we’ll be able to live into that decision well.”