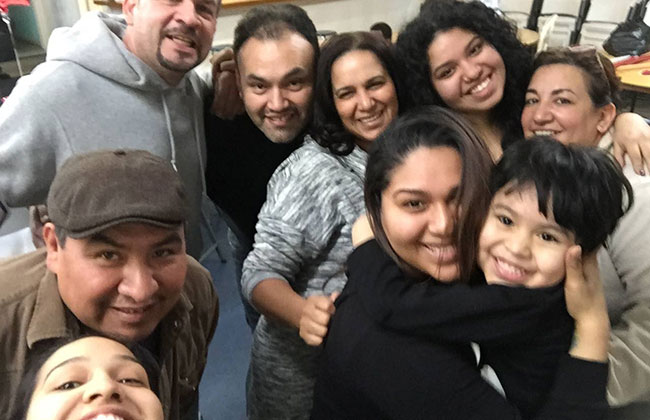 When Fabio Sosa became the pastor at Riverside Reformed Church in Paterson, New Jersey, in 2011, the building was falling apart—and so was the church’s membership.

For the previous 20 years, the consistory was controlled by just a few members, which left others feeling unable to contribute to the church. A series of pastors came and went, always clashing with the consistory.

“Everybody ended up leaving,” says Sosa. Potential growth was stunted, he says, by an “enter if you dare” attitude toward newcomers. Moreover, Riverside was in financial trouble.

“[The] church wasn’t healthy,” says Eddy Alemán, RCA director of strategic leadership development, coordinator of Hispanic ministries, and Sosa’s mentor. “It was like an abandoned building. They worshiped in the basement.”

Recognizing that things needed to change, Riverside called up Brigido Cabrera, former RCA coordinator of Hispanic ministries, and asked for guidance. Cabrera advised Riverside to hire Sosa temporarily while all three parties discerned whether Sosa would become the full-time pastor.

Sosa, who emigrated from Argentina in 2002, had trained as a traveling pastor and helped troubled churches in New York, Florida, and California. He had become known as a fix-it specialist.

Soon after Sosa began working at Riverside, it became clear that the church needed such a specialist. After three months, he was hired full time, and the Classis of Passaic Valley committed to support him.

And he did. For the next three years, he strove to change the consistory’s culture. Rather than limiting power to a few people, he trained new members to lead. He emphasized openness and renovation. The shift was turbulent and painful; by the end, only three of the original members remained on the consistory. Yet Sosa was confident it was the right thing to do.

Simultaneously, with volunteers and funding from the RCA, much of the church—from the front steps to the basement—was restored.

By 2014, things were improving. With the encouragement of the church leadership, Sosa befriended other area churches, talked with community members, and rebranded. In the years before Sosa arrived, Riverside had changed its name to Iglesia Cristiana Ebenezer. Knowing that the congregation included both Spanish and English speakers, he advised the congregation to return to the original name, Riverside Reformed Church.

As a result of these efforts, new people visited Riverside. More importantly, they stayed. Today, 80 people from 15 different countries attend Riverside, including several Chileans who travel from Long Island, despite the two-hour drive.

Riverside members have also opened their arms to the community. The church offers a bilingual Sunday school class for children. In the fall, Riverside donated school supplies to needy children and provided turkey dinners to about 50 families at Thanksgiving.

“They are doing awesome,” says Alemán, who has given Riverside coaching, volunteers, and emotional support over the years. Part of that support came to Sosa through the RCA’s Hispanic pastoral networks, which Alemán founded in 2014. The networks connect pastors in order to share best practices, undergo training, and pray for each other.

This year, Alemán will pass off leadership of the networks to Sosa, who was ordained in the RCA in October with encouragement from Riverside, where he will continue as pastor. The new role will afford Sosa the opportunity to support other Hispanic pastors as they guide churches through their own growing pains.

“I’m going to do the same in other churches,” Sosa says. “I don’t see myself as a savior of churches, but I want to help them grow.”

Editor’s note: This interview was conducted in Spanish. Quotes from Sosa are the writer’s translations.

Rob MacKay is a freelance writer and member of Sunnyside Reformed Church in New York City.

Promote a healthy consistory culture with resources from www.rca.org/consistory.