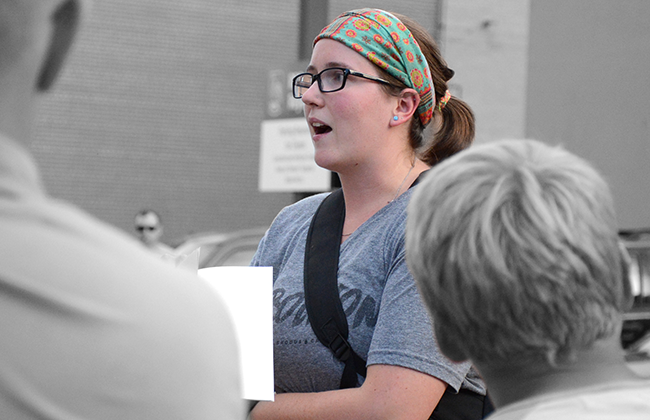 My Journey into Justice

Home / My Journey into Justice

Seeking justice is at the heart of the Christian faith. Jennifer Lucking explains how to make sure your lifestyle doesn’t trap others in systems of slavery.

My biological daughter was not the first to call me “Momma.” The first was a young woman who has been trafficked by various pimps and traffickers for as long as I’ve known her.

Sabrina (name changed) was 18—just a girl—when I met her. It was four years ago, and I was working for an agency that provided support to victims and survivors of human trafficking. Sabrina was coming in from out of province, moving so that she would be farther away from her “boyfriend.” Her boyfriend was also her pimp, a man who used his romantic relationship with her to exploit her, force her to work in the sex trade, and earn him money. Our agency was helping transition her into a local shelter.

My first interactions with Sabrina were through text messages. She was nervous—about leaving her home, her family, even her “boyfriend.” I tried to encourage her as much as a stranger could through text messages. I told her she was strong and brave. I told her I was proud of her for doing this for herself. I prayed for her and wondered if I should tell her so. But I worried she might have had negative experiences with God, the church, or Christians, so I didn’t.

We finally met at the airport. She showed me her tattoos, including one of Psalm 23. I told her I had been praying for her but was hesitant to share that with her via text. She looked at me and said, “I wish you would have. It would have made me feel better.”

From a young age, I’ve felt compelled to stand for social justice. But at times I didn’t feel that my heart was nurtured in the church. Justice was often associated with a secular agenda and seemed secondary to things like evangelism. But over the years, I found others in the church whose hearts were burdened by injustices—people like John Kapteyn, who recently retired as executive secretary of the Regional Synod of Canada, and JP Sundararajan, an RCA missionary. These friends encouraged me to follow God’s call to seek justice.

Increasingly, as I speak to others across the RCA, I witness a desire, especially among millennials, to engage in justice issues— whether it’s racial reconciliation, the refugee crisis, or abolitionist and anti-slavery movements—not apart from our Christian faith but as central to God’s commands that we seek justice: “I’ll tell you what it really means to worship the Lord. Remove the chains of prisoners who are chained unjustly. Free those who are abused! … Give your food to the hungry and care for the homeless. Then your light will shine in the dark; your darkest hour will be like the noonday sun” (Isaiah 58:6, 10, CEV).

A person, not an issue

Seeking justice becomes part of your lifestyle when you remember people. Despite slavery being illegal in all countries, millions of people around the world are forced to work in arrangements that give them no power. They are victims of human trafficking. Essentially, they are working as slaves.

We are all complicit in systems of slavery. That’s because many of the things we buy are produced, at some level, by people who were forced into slavery. I try to make choices that have a positive impact on their lives—the lives of the most vulnerable people. One way I do that is by checking my slavery footprint at www.slaveryfootprint.org. It’s a website that shows the impact of my lifestyle and consumer choices and calculates the number of people who were forced into slavery to produce my clothes, electronics, food, and recreational gear.

It has become difficult for me to snap up cheap clothing when I remember that much of the clothing industry relies on the exploitation of others—from children, who are held back from school to pick cotton, to adults, who work in unjust conditions to sew garments. Now I think carefully before buying coffee, chocolate, produce, and meat because they are regularly produced in parts of the world that use child or forced labor. I’m less compelled to upgrade my phone now that I know that components in most devices are mined by slave labor.

For me, social justice is more than an issue. It is personal. God’s people are being exploited, often for the benefit of others. Sabrina is one of those people. Because of her, complacency isn’t an option for me.

There’s not yet a happy ending to Sabrina’s story, although I haven’t lost hope. She has returned to the sex trade. We haven’t seen each other in a couple of years, but thanks to technology and social media, we still stay in touch. She Snapchats a picture of a date with her pimp, and I send her a message saying I am thinking of her. She posts a picture of working late at a massage parlor, and I tell her I miss her. She often responds, “I do too, Momma.”

Jennifer Lucking is an RCA missionary in partnership with the Regional Synod of Canada. She is working with Restorations Second Stage Homes to open a long-term home for victims and survivors of commercial sexual exploitation in Canada. She also works with RCA congregations to raise awareness about slavery and exploitation.

Pray for women like Sabrina who are caught in systems of human trafficking.

Does your heart beat for justice? Email advocacy@rca.org to get involved.