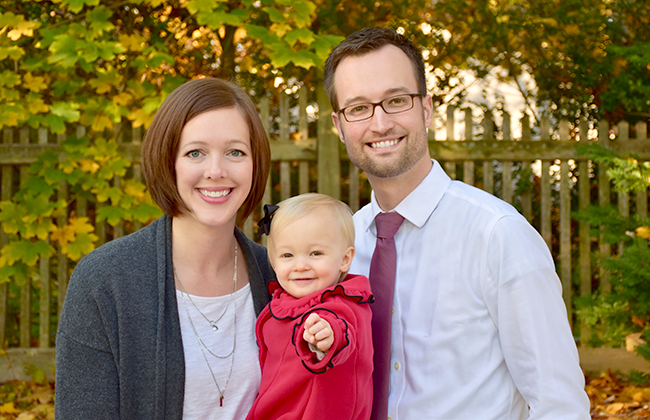 On Parenting and Pastoring

Home › On Parenting and Pastoring

Joshua Scheid ponders God’s grace, which gave him the courage to raise a daughter and pastor a church—even in his greatest moments of self-doubt.

Father, grow our bodies strong, our minds smart, our hearts soft, and our faith sincere in your Son who saves. We love you, Lord. Amen.

I prayed this prayer over my daughter, Miriam, about a year and a half ago, as I held her in my arms before laying her in her crib. It was a prayer I thought I was praying for her, but I’ve since realized the Holy Spirit had me praying with her. I needed to pray it myself.

Why? Because I’m both a parent and a pastor, and I’ve been learning how God is using those roles to continue the Spirit’s work of faith in me. I’ve been a dad for two years now. My daughter, Miriam, is an abundant joy: full of silliness and imagination, new words and the “whys?” (already!). I’ve been a pastor almost twice as long, which is to say I’m still more of a spring chicken than a seasoned veteran in either regard.

With that brief background, may I confess something? Part of me feels incapable of being either parent or pastor. Though I want to be a good pastor and a great parent, the temptation to self-doubt prowls more often than I’d like to admit. I am my own worst critic. But the story of this confession goes deeper than that. The reason I’m comfortable admitting my self-doubt is that I’m starting to see more clearly how God’s Spirit has been at work in my life doing “immeasurably more than I could ask or imagine.” Every day I’m learning to trust Jesus more.

In a strange way, the heart of my self-doubt about being a good father to Miriam and the heart of my coming to know the Lord and my call to ministry are one and the same: an empty relationship with my biological dad. My dad hasn’t been involved in my life since well before I was even Miriam’s age. Truly I’ve never known him at all, as he was absent long before the earliest memories I have as a child. (To her credit, I was raised by my mom, who taught me to love unconditionally and to give self-sacrificially.)

While I don’t have a relationship with my biological dad, my heavenly Father knows me and I know my heavenly Father. From a young age, that has been a tangible reality to me. It’s the story of grace and redemption that God’s Spirit has been writing in my heart and is writing still today.

One night about a year and a half ago, fresh on the heels of those first sleep-deprived months with a new baby, I was feeling the weight of all the unknowns of fatherhood and ministry. How was I going to lead my family, let alone an entire congregation, in this new season? How could I, imperfect and inconsistent as I am, ever do all the right things that good dads do?

It was then that I prayed that prayer, which has stuck with me since: Father, grow our bodies strong, our minds smart, our hearts soft, and our faith sincere in your Son who saves. We love you, Lord. Amen.

It’s just a simple prayer, but as I prayed it over and over again with Miriam after that night, I began to see that God was refining and molding me not just as a parent, not just as a pastor, but as a person. God was reminding me of who I am and whose I am, even and especially in moments of self-doubt. One of the greatest gifts of faith is experiencing forgiveness and freedom, healing and wholeness as we draw near to the heart of God. It’s the heart of a good and perfect and present Father, who loves unconditionally and gave his Son self-sacrificially so that we might know the depths of this gospel in each of our lives.

Somewhere along the way I read that the most important thing, both as a parent and as a pastor, is not what you do but who you raise. That may be the greatest lesson I’ve learned so far—a lesson I’ll keep learning for a lifetime. Wise, experienced dads tell me the lessons and growth of fathering, especially raising a daughter, are just beginning. Wise, experienced pastors tell me the same thing about ministry.

Like a new pastor might help a congregation see their mission and community with fresh eyes, having a toddler helps a parent see the world with a renewed sense of wonder at the works of God’s hand. And every time I stop with Miriam to wonder a “why?” or pause to ponder a “why?” of my own—why has God entrusted me with such a precious daughter, why have I been called to serve a community of sisters and brothers in Christ, why have I received such amazing grace in my life—I’m reminded of God’s promise of faithfulness to me and to her and to you.

LEARN: Joshua is one of several RCA pastors who are a part of the First Call Initiative, which supports pastors serving in their first call. If you know a recent seminary graduate or your church is considering extending a call to a first-time pastor, email Andy Bossardet at abossardet@rca.org to learn more about supporting new pastors so churches can thrive.