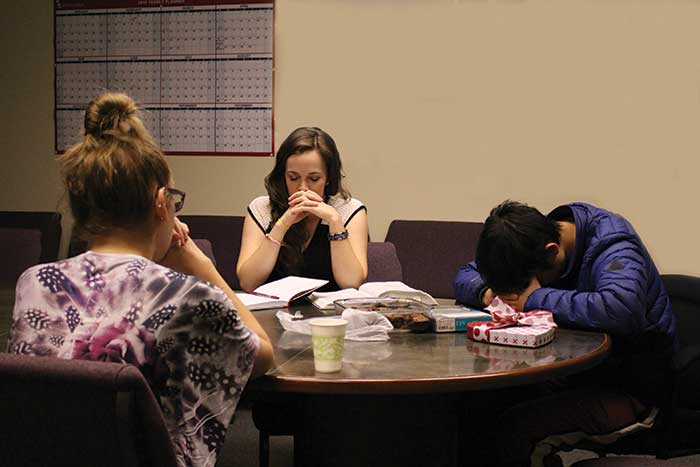 Tylor LongWing was dealing with depression and anxiety when she first entered Springs Community Church in 2013. She went to her first worship service because she was having a bad day and wanted to be with her best friend—and that night she gave her life to Jesus.

Tylor LongWing was dealing with depression and anxiety when she first entered Springs Community Church in 2013. Just 16 years old and the adopted daughter of non-religious parents, she had never contemplated God or attending services.

“I was having a bad day, and I wanted to be with my best friend [Jennie Hart],” she says.

The service was particularly inspiring for the high school junior. Afterward, she struck up a conversation with Emily Jusell, a youth leader at the Colorado Springs congregation. They discussed her experience, the Holy Spirit, and God’s love. Jusell, who is three years older, told LongWing that God was not angry with her for any past immoralities; in fact, God had always loved her.

“It blew my mind. I felt so relieved, but convinced,” LongWing says. “I gave my life to Jesus that night…I fell in love with God.” A few months later, she was baptized.

Fast-forward to the present, and LongWing spends 30 hours a week energetically interning for Springs Community’s youth ministry in addition to working the same number of hours as a cashier at a local store. (Plus, she only experiences occasional, short pangs of depression and anxiety.)

LongWing ministers to about 40 students at the local Liberty High School, discussing spirituality and the power of Jesus with them. She walks with them. She prays with them. And later she follows up, making sure that they are growing with God. At other times, she goes to football games, theater shows, and other extracurricular events to connect with students in a relaxed environment and on their own terms. And in a perfect turn of events, she works with her best friend Hart, who is also an intern.

“Ministry makes me super happy,” said LongWing, who plans to attend seminary and eventually become a pastor. “The person I was, was not what I wanted to be.”

What is the primary message of Jesus? It’s a question that theology experts and Bible study groups will probably debate forever. Love your neighbor as yourself, some say. Eternal life through faith, others insist. Turn the other cheek, a few might argue. Well, Springs Community has a different interpretation—one that has led to about 200 salvations over the past two years, including LongWing’s.

“Discipleship,” says Eric Carpenter, the lead pastor. “Jesus didn’t start a seminary or build a church. Jesus grabbed 12 guys and shared a life with them.”

Employing a training philosophy called 3DM, Springs Community focuses on spiritual growth and outreach underlined by the Message, Ministry, and Mission of Jesus. The church empowers members with knowledge, vernacular, and support so they can go to the streets, schools, living rooms, and workplaces to discuss the wonders of living with the Holy Spirit and its immediate, transformational qualities.

“Many think [Christianity] is about getting people into heaven. They talk about eternal life, thinking it happens when we die,” Carpenter says. “But it’s now. [Jesus] was getting heaven into people. A fantastic life right now—a different life in the kingdom.”

In 2007 Carpenter wrote a book, Jesus’ Big Idea: Living in the Days of the Kingdom, which guides leaders and small groups to enjoy Christ here on earth, even while waiting for Christ to come again. The 45-year-old practices what he preaches at Springs Community, where he arranges meetings, or “huddles,” with church members to learn and grow in the power of the Holy Spirit.

Huddles vary in size and frequency at this roughly 500-member church. Carpenter is in a weekly five-person huddle, for example, while other huddles involve as many as 20 individuals and some are strictly one-on-one. (LongWing usually holds huddles on Saturday nights.)

Carpenter describes Colorado Springs as “a city of churches” that is generally receptive to missionary work, but also praises his “very committed” associate pastor, Ben Brooks, who spearheads adult and neighborhood outreach. Brooks leads a huddle and works on what is described as a “pathway to leadership.”

Carpenter also lauds director of student ministries Shawn Shonk, noting that the biggest huddles—and growth—are taking place among teens and young adults. Shonk says 89 teens and young adults became Christians last year and 107 the previous year. (The number of baptisms is lower because some parents will not allow or support them, but they are happening, too.)

“It’s awesome,” says Shonk. “Pastor has a phenomenal vision for continuing to be reformed.”

He describes a support team of 28 unpaid interns—including LongWing and Hart—who range in age from 15 to 30. Some are married. Some have full-time jobs. Some are studying. Most give 25 hours of unpaid work a week. “They are phenomenal people. I am so lucky and blessed,” Shonk says. “It’s like having 28 pastors instead of one.” Then, citing his mostly managerial role, he jokes: “I’m the only youth pastor who doesn’t work directly with youth.”

LongWing and the other interns are up front, but not overbearing. They meet people on their schedules and at comfortable venues, seeking to create relationships before evangelizing. Interactions could begin simply over coffee and chatting, as trust is the basis, Shonk says, noting that many youth seem to be attracted to the energy of Springs Community and its members.

“It hasn’t been an easy road by any means,” he says. “There’s no model because nobody else has done it, and we have to make up rules as we go.”

Shonk, 34, has been the youth director for four years and he has just begun the process to become ordained. His immediate goals are to create missional communities in more schools and learn better ways to disciple.

Carpenter hopes to talk to other churches about the message/ministry/mission philosophy of 3DM in the future. He wants this notion to be front and center during church planting and minister training.

However, he’s quick to add: “We don’t have it all figured out, but it’s an exciting discovery process. We’re seeing the Holy Spirit move in significant ways inside and outside the church.”

Rob MacKay is a freelance writer and a member of Sunnyside Reformed Church in New York City.

Thank God for the lives being changed through relational discipleship at Springs Community Church.

Looking for ideas to better connect with the next generation in your church? Email nextgen@rca.org.