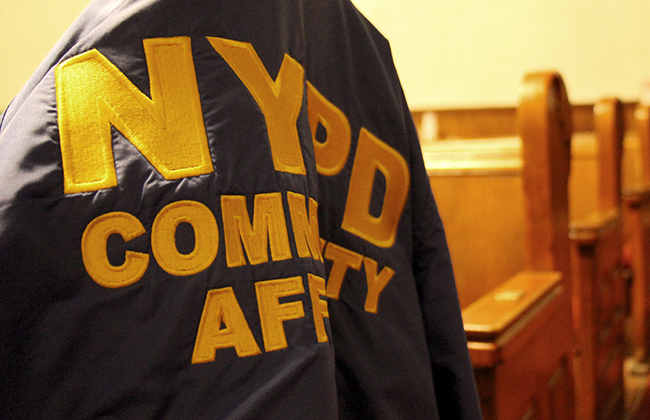 How an RCA pastor is bringing the police and community together.

The event was part of the NYPD’s efforts to build relationships with the community. As the clergy liaison to the police department, First Reformed pastor Dwayne Jackson helps police make these connections. So when he spotted a group of children he knew at the event, he asked them, “Do you want to meet the captain of the department?”

“The captain? The person in charge?” they asked. “Yeah, sure!”

So Jackson introduced them to the captain. Initially, the children were shy, looking at him like he was a celebrity. Then Jackson got the captain’s name wrong.

“They laughed and they teased me, and [the captain] laughed,” Jackson says. “And then they walked away feeling that they now know somebody who is important in the police department. My hope is that that will carry with them throughout the time that they grow up, so that they can then turn around and have a great working relationship with the police as they grow older.”

Great relationships between police and civilians are important for a community’s health. A poll of New York residents found that the more they interact with law enforcement, the more they trust police. This matters because when civilians and police trust each other, it’s easier to address the systems and policies that make communities unsafe. Working together with civilians and neighborhood leaders like Jackson also helps police better understand and address the needs of their community. This strategy is called community policing, and it looks a lot like Jackson’s approach to outreach as a pastor.

“Ministry does not just happen in the four walls of the church,” Jackson says. “If you’re going to be a part of the neighborhood that you’re ministering to, you have to be where the people are. So I started going out to all of the community events, to the community center, to the various meetings.”

In fact, Jackson got connected with the police department because he and the community affairs officer kept showing up to the same meetings. Seeing his commitment to the neighborhood, the officer asked him to be the clergy liaison—to help police build relationships in Astoria and to partner with them on common goals.

Since then, Jackson has developed a close partnership with the community affairs officers in his neighborhood, Darryl Johnson and Latoya McLeod.

“It starts out with just learning to trust each other and to talk to each other and to be open and honest with each other. To share our fears, our hurts, our anxieties,” Jackson says of the partnership. “I grew up in the South Bronx, and so I had some issues with the police growing up, and I was able to share it with them, and they didn’t get offended. They heard my hurt, they heard my pain, and then we grew past it and built a relationship that I wouldn’t trade for anything.”

As community affairs officers, McLeod and Johnson work with area residents to address their concerns and improve their neighborhood. That can mean anything from taking someone grocery shopping to helping them process a difficult interaction with another police officer. Jackson often partners with them on these efforts.

The officers have already earned the trust of many residents this way.

“There’s not a time when we’ve called on them for any reason, and they haven’t come through for us—not one time,” says Almeda Rodman, who lives in the neighborhood. Turning to Jackson and the officers, she adds, “As a resident of the area, we couldn’t have had a better choice. I love you guys.”

But not everyone in the community is as comfortable with asking police officers for help as Rodman. That’s where Jackson comes in.

“Sometimes people will confide in [Jackson], but they would not pick up the phone and call 911 for any reason,” says McLeod.

When someone comes to Jackson with a problem the officers can help with, he’ll often encourage them to have a phone conversation with McLeod or Johnson about it. This allows the person to get advice while remaining anonymous. Even when people come to Jackson with problems that could land them in jail, he’s often able to work with the officers to find a solution.

That way, says Jackson, “it stays as something we can resolve without police having to go into ‘police mode.’”

The way Jackson and the officers see it, the more problems they can resolve before “police mode” is necessary, the better. Ultimately, their goal is for everyone in the community to feel comfortable asking them for help. It’s just that their job titles keep getting in the way.

“People put us, not even on a pedestal, but in a different category,” says Johnson, “like we’re not normal human beings for some reason.”

“We had a cop who deejays doing the turntables at [the neighborhood fun day],” says McLeod. “People were like, ‘A cop can deejay?’ They don’t see us as regular people. Sometimes we have to share that we’re not always in uniform, so we’ve experienced some of the same things that the community has.”

As a pastor, Jackson can relate.

“People see me as being this larger-than-life figure that stands between them and their faith in God,” he says. “They don’t look at me as being the type of person who would stand out in the community and do the ‘Electric Slide’ along with everybody else.”

“Now we have another generation … of young children and teenagers who can actually feel comfortable going to the police and saying, ‘I remember you, and I need help,’ as opposed to being afraid whenever police come in the neighborhood,” says Jackson.

In addition to his work as clergy liaison, he also meets regularly with other local RCA pastors to address the relationships between the community and police. Jackson hopes all of this is only the beginning of the transformation.

“If I could see this being replicated in other parts of New York, I would be ecstatic,” Jackson says. “Because at that point, we’d all have real, working communities, where we all live together, work together, and play together.”

Want to strengthen the relationship between your community and police department? Email mosaic@rca.org to start the process.

Read a prayer for reconciliation that Jackson has prayed with his congregation and community.

Download the RCA Today app to watch a video of Jackson telling another encouraging story from the neighborhood.