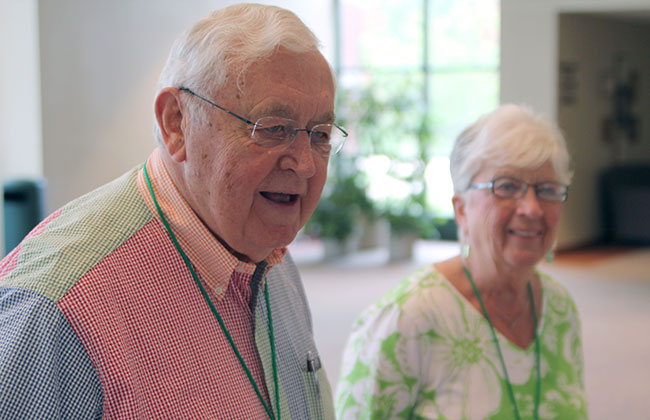 The Reformed Church in America celebrates the life of Ed Mulder, who served the RCA as general secretary from 1983 to 1994. Mulder passed away on May 1, 2018, at 89 years old.

The Reformed Church in America celebrates the life of Edwin Mulder, who served the RCA as general secretary from 1983 to 1994. Mulder passed away on May 1, 2018, at 89 years old.

“[Ed] was a leader whose heart for the gospel was as passionate for justice as it was for the good news,” says Tom De Vries, who served as general secretary of the RCA from 2011 to 2017. “Ed was at the forefront … in shepherding and loving the people that God had entrusted to him as a pastor, and in leading a denomination faithfully in its fruitful calling—from Johannesburg, South Africa, to Holland, Michigan.”

“Ed Mulder led the Reformed Church in America with pastoral wisdom, evangelical warmth, ecumenical vision, and prophetic clarity,” adds Wes Granberg-Michaelson, who succeeded Mulder as general secretary in 1994 and retired from the role in 2011. “He will be remembered most of all as a beloved and patient pastor, willing to listen, and always ready to find ways to move the RCA forward, together.”

Mulder has often been described as a “teddy bear” because of his warm and pastoral personality. And his leadership in the RCA reflected that. Introducing a new denominational theme in a 1984 Church Herald article, Mulder wrote: “All of us need family. We need to be included into the community of faith. ‘A People Who Belong…’ is intended to be a covenantal hug.”

In a ministry that spanned half a century, God called Mulder to a number of leadership positions within the RCA. He pastored churches in Michigan, New Jersey, and New York, including service in some of the RCA’s largest congregations. He also served as the president of the Particular Synod of New Jersey in 1976-77 and as the president of the General Synod in 1979-80.

“Ed laid the groundwork for the Formula of Agreement, committed to healing the centuries-old division between Reformed and Lutheran traditions,” says Granberg-Michaelson. “Moreover, his experiences in South Africa, first as General Synod president, instilled a commitment to racial healing that opened the door to the RCA’s eventual embrace of the Belhar Confession.”

Under Mulder’s leadership, the RCA took a strong stance on apartheid in South Africa. Mulder became passionate about the plight of South Africans of color on a trip to South Africa he took as president of General Synod.

“It was the most dramatic experience in my life, the first time in my life I understood the meaning of the cleansing of the temple,” Mulder said of the trip in a 2009 interview. “I saw Jesus’s anger at what people were doing in the name of God by exploiting people, and that’s exactly what was being done in South Africa. People were being exploited in the name of God.”

After careful study and consideration, the RCA adopted the Belhar Confession in 2009.

Mulder said of the confession: “I think all of us want to become more than we are, and that’s the call of the gospel. … We need to look in the mirror and see ourselves. And that’s why I believe that the Belhar has such relevance, not just for South Africa and what’s happened there, but for here. … It is about the human situation.”

Mulder faithfully answered the call to “become more than we are” with the power of the gospel throughout his life. And he helped the people around him to do the same.

“I will always be indebted to Ed for the personal interest he took in me, as a young pastor, as a denominational leader, and as one who would follow him a number of years later in serving the RCA as general secretary,” says De Vries. “Ed will be remembered for the legacy of his leadership that helped set the direction of our denomination and for the humble heart of caring that reached out and embraced everyone with the love of Christ.”

“Ed Mulder modeled the right balance of grace and truth, strength and compassion, challenge and encouragement,” says interim general secretary Don Poest. “But while there is loss today, we are so much more because he led us and served us for so long.”

Although Mulder retired as general secretary in 1994, he continued to be an active part of the RCA, serving in the local church, as a General Synod delegate, and as an interim president of New Brunswick Theological Seminary.

“Ed Mulder believed in and exemplified servant leadership,” says Granberg-Michaelson. “He was a mentor and friend, always willing to share his wisdom and his heart. Those qualities made him beloved throughout the RCA. He cherished us all, and we now cherish his legacy.”

Mulder is survived by his wife, Luella.