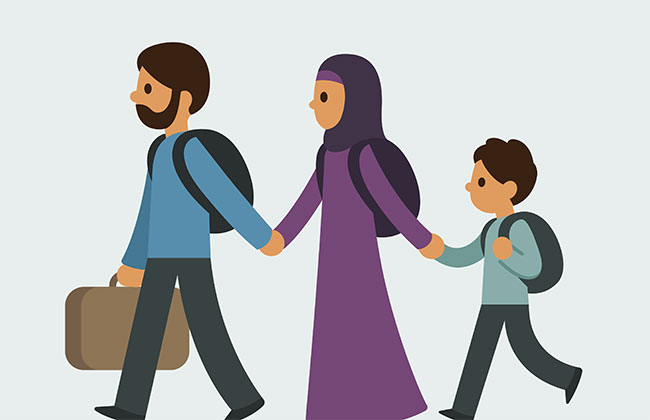 Refugee Response—One Family at a Time

Churches in Passaic Valley Classis have found a variety of ways to support refugees.

For Lenore Panas, it started with cooking spices. A retired elementary teacher and deacon at Ponds Reformed Church in Oakland, New Jersey, Panas loves cooking. So, when Ponds asked members for help relocating an Afghani refugee family of nine into their new home in the area, Panas researched foods and spices.

“I imagined this Afghani mother, cooking for her family,” she says. “When she woke up in the morning, in a brand-new country, what would she cook for breakfast? What would be familiar?”

After ordering some common Middle Eastern spices, Panas joined others from church setting up housekeeping for the incoming family one Sunday afternoon. Everyone pitched in. Cleaning the kitchen or organizing linens, everyone worked together. At the end of the day the apartment was ready, but Panas couldn’t stop thinking about the family: “I don’t even know these people, yet here I am lying awake at night worried about total strangers. I found this connection just by setting up an apartment for them.”

It’s not the first time Ponds Reformed has welcomed refugees. A few years ago, a young refugee from Syria named Sandy found her way to the church, became a member, and moved in with church members. (Read Sandy’s story here.)

Additionally, the pastor at Ponds Reformed, Nathan Busker, and his friend and fellow pastor, Kathleen Edwards Chase, are cochairs of the mission commission for their classis, Passaic Valley. Edwards Chase is pastor of First Reformed Church in the neighboring Pompton Plains. Over the past few years, the mission commission has helped resettled more than ten refugee families with donations and labor from members and churches all over the valley.

When the pastors hear about an incoming refugee family, they alert churches in Passaic Valley Classis of the need for furniture, clothing, and other household items. As donations roll in, the items are stored in space at both First Reformed and Abundant Life Reformed Church in Wyckoff, New Jersey.

“Partnerships are the best way to get things done in the community,” says Edwards Chase. Sometimes those partnerships comes in the form of a U-Haul truck.

“We’ve rented a 24-foot U-Haul and went out to the Jersey shore for a furniture pick-up,” says Busker. The mission commission collects everything from beds and couches to pots and pans to towels and TVs.

Once a new refugee family moves in, the partnerships continue. Busker can rattle off example after example of churches stepping up: First Reformed uses its bus to transport families, has hosted a World Vision Refugee Camp Experience, and has partnered with Ponds Reformed to pack backpacks for refugee camps overseas. Reformed Church of Highland Park supported a young refugee mother. Robert Fretz, pastor of Saddle River Reformed Church in Upper Saddle River, donated his car to a refugee family that needed reliable transportation. Pompton Reformed Church in Pompton Lakes offered its parsonage as short-term housing for refugees. Sarah Jacobsen­­, a member of Abundant Life Reformed Church who used to teach English as a Second Language, now regularly tutors a Syrian refugee in English.

Most of these churches don’t have a dedicated program or process for supporting refugees. But their efforts have not gone unnoticed, especially by Busker and Edwards Chase.

“People are looking to give,” says Busker. “They just need the opportunity.”