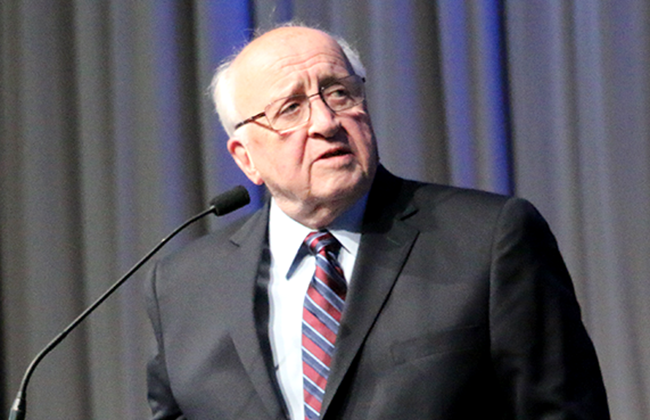 In the evening on Friday, June 9, Richard Mouw spoke to the synod about civil disagreement—why Reformed Christians struggle with it and why we really need to improve.

He began with a quote from Martin Marty: “It is a fact of public life that when it comes to religion and politics, ‘the committed lack civility’ and the ‘civil often lack conviction.’ What we need is convicted civility.”

“It seems to me,” said Mouw, “that that is precisely the point made in the New Testament.”

Mouw said that Christians should stand for truth “with gentleness and reverence” (1 Peter 3:16), acknowledging that to do so is hard for Christians because “all of us have taken vows to be faithful to Scripture, to the unity of the church, and to our confessions.”

However, he believes that it is important for Reformed Christians to engage in conversation about our disagreements, and he offered suggestions for having such conversations.

“First, we must make sure we’re being truthful about other person’s beliefs,” Mouw said. “This means asking people what they believe rather than telling them what they believe. It’s saying, ‘Is this a good way to describe your view? Can you help me understand what you believe?’”

Mouw’s second suggestion was to prepare for disagreements by evaluating your own spirit.

“As Reformed people, we understand that we all have motives to think the best of ourselves,” he said. “So as an act of spiritual preparation and discernment, reverse the process. Look into yourself and ask questions like, ‘Do I just want to win? Am I guided by implacable severity? Am I guided by a desire to put the person down with whom I disagree?’”

Mouw advised trying to see those with whom you disagree through God’s eyes, as “friends of Jesus.” He also emphasized the importance of grounding conversations about subjects upon which we disagree in the Bible.

“Within the Christian community, we share more in common than just our humanness,” he said. “We share our faith in Jesus Christ. And the Lord has made it very clear that he wants us to make a visible expression of unity.”

As his speech drew to a close, Mouw offered a prayer: “My prayer for the RCA, is that this denomination will find ways together to serve the savior in our present-day culture, through racism, sexual trafficking, mean-spiritedness, endless promiscuity—promiscuity across the spectrum of sexual attraction—to proclaim the gospel.”

After Mouw spoke, delegates engaged in table discussions about what serving the savior together should look like for the RCA. These discussions are a starting point for the larger discussion proposed by general secretary Tom De Vries in his report.

Read the transcript of Richard Mouw’s address to synod here.