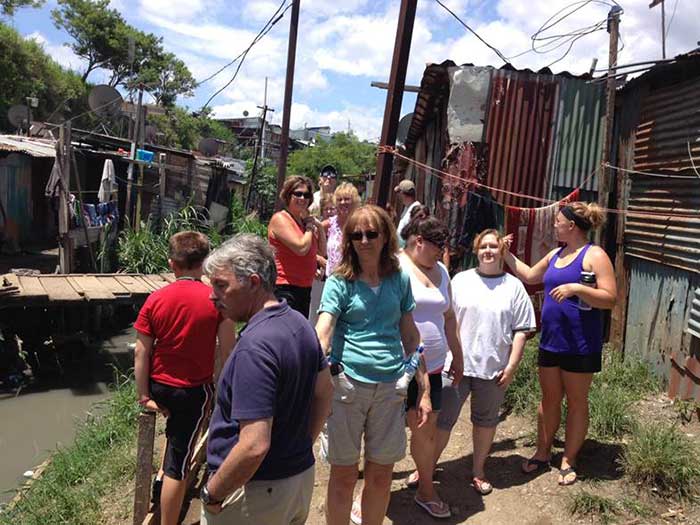 How has this mission trip transformed those who participated? “It really opened my eyes to the power of prayer,” says Rachel Riphagen. “I saw how much it touched people to be prayed for and how connected to the Holy Spirit and my Christian brothers and sisters I felt while praying with people while we were there.

“Those experiences were such a gift to me. I’m still working on courage to do that more often back home.”

“While serving there I had the opportunity to not only do physical labor, but emotional and spiritual labor as well,” says Jordan Baker. “When many of us think of mission trips, we think of construction projects: painting, building. These things are good and necessary, but I learned the importance of building relationships as well. Going out of my comfort zone to engage with people not only of a different culture, but who also spoke a different language would not have been possible without the grace of God. While painting a wall might be something that will be appreciated, what lasts is the impact you make on people’s lives.

“The most moving example of this may have been when the men of the group had the opportunity to pray over several women of the community. These are women who may have been mistreated or abandoned by the men in their lives (as so many women there have been), but we had the opportunity to stand up and show them the love of God. Seeing how something as seemingly simple as prayer, fumbling through the words of what to say or how to convey a meaning, can be used by God to advance his kingdom is something I will never forget.”

The group brought breakfast to the homeless, gave testimonies at a youth service, played soccer with local families, taught a Bible school for children, hosted a movie night, gave haircuts and manicures to women, painted a mission building, and visited in homes where they prayed for the residents.

Although the two churches have often gone on mission trips together, this one was particularly challenging because participants lived in homes with Costa Rican families, most of whom spoke only Spanish. However, through games, sign language, patience, and the help of a translator, they were able to communicate and build friendships.

As pastor, I enjoyed the opportunities to preach using simple magic tricks and illustrations that helped break the language barrier. I was humbled by the response to the gospel as people accepted Christ and came forward for prayer, even though I was speaking in a language they did not understand. It showed me that God’s Word is not stopped or slowed by my feeble attempts.

The mission trip had a transforming effect even on those who didn’t go, as everyone in both churches helped to raise funds and offer prayer support. The trip was sponsored by Christ for the City International.