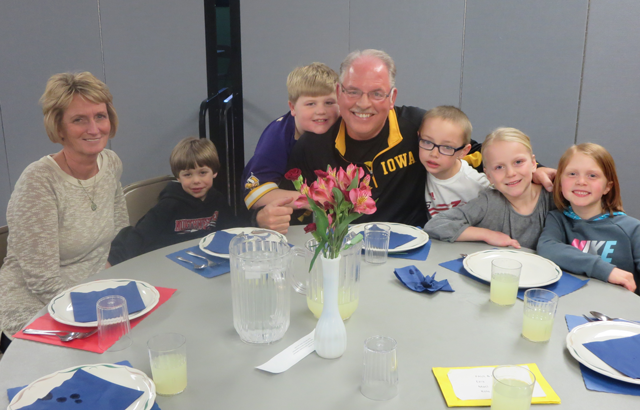 To fashion a Christian education ministry that would connect the generations, Central Reformed Church in Sioux Center, Iowa, looked to the stars.

To fashion a Christian education ministry that would connect the generations, Central Reformed Church in Sioux Center, Iowa, looked to the stars.

“One of the things we have identified as being vitally important at Central is to be multi-generational,” explains pastor Van Rathbun. “The way we’ve started to live that out in our Christian education program is to have a cross-generation of folks who are impacting the lives of kids in a positive way.”

That’s where the stars come in. STARS is a five-point discipling approach for children that encourages leaders to share the gospel, team up with parents, advance spiritual maturity, reach other children, and serve all children.

The center of the effort is a Wednesday evening program called Logos for children from kindergarten to sixth grade. The evening features “table parents”—adults who sit with the kids around tables for a meal and a story/lesson. The same table parents stay with the same kids each week throughout the school year.

Jeremy Koerselman is chairman of the Central education committee, which oversees the evening program. He is also a “Dinner Dean,” one of two people who present the Bible story/lesson to the kids in differing age groupings.

Koerselman says research shows that faith tends to “stick” with children who have interactions with several faithful adults throughout their childhood.

“These table parents become a positive model of faith and trust, without having the responsibility of doing the teaching themselves—they become mentors for some of these young students,” he says.

Central Reformed’s Logos program builds on a key finding from new research about helping children develop faith that sticks.
Under the leadership of Kara Powell and Brad Griffin, Fuller Youth Institute has extensively researched key components of faith development that correspond to an active faith as students move into adulthood.

One of the most important factors? Intergenerational connection with the entire congregation. More than just a multi-generational congregation, it’s people of all ages relating with one another and doing life together. Think of it as a family gathering, but instead of an adults’ table and a kids’ table, everyone is at one table, eating and conversing with one another.

To learn more about encouraging a culture in your congregation where baptismal vows nurture a sticky faith, visit stickyfaith.org/about-sticky-faith or email nextgen@rca.org.

Room at the tables

Logos director Tami Vanden Brink said there are table guidelines. No one can eat until the entire table has food. And the family-style dishes need to be properly passed.

“There are table time questions and we need to take our turn sharing answers and being good listeners to those who are sharing,” she says.

There’s also a craft/activity time and a music session where kids learn songs for a special program shared twice a year in Sunday worship.

With a pair of table parents at each dining table, and nearly 70 students, the program is labor intensive. The ratio of adults to children is 1:2, though it’s closer to one on one if additional behind-the-scenes volunteers are factored in.

But by dividing up various responsibilities, table parents are freed to concentrate on conversations and developing relationships with their table children.

“They don’t have to assume a lot of work normally associated in working with youth,” says Koerselman, whose seven-year-old son is in the program.

The relationships bubble over beyond Wednesday evenings. Kids greet their table parents at church on Sundays and draw pictures to share with them. Once a year the children visit “shut-ins” of the church and bring them a gift.

“There are some [kids] who will enthusiastically greet us by name, and we can do the same to them both in and outside of church,” says Marty Verhoef, who has been a table parent and craft helper for several years with her husband, Bruce. She says the interaction with the kids each week gives them hope for tomorrow.

One couple, with a rotating group of volunteers, handles food preparation and serving. Others help with set-up and clean-up, welcoming children and leading crafts and music.

A new volunteer this year is 92-year-old Yette Te Paske, who became personally involved after agreeing to pray for a particular program volunteer.

That volunteer happened to be one of the Logos cooks. Moving beyond prayer, Yette showed up expecting to help.

“She’s been here every week since, pouring applesauce into bowls and greeting the kids—it’s been fascinating to see her involved,” Rathbun says.

One 80-year-old man has been the chief dishwasher for the last four years and hasn’t missed a week, according to the pastor. In fact, the dishwashing crew is key as the program seldom uses paper or plastic plates, cups, and utensils.

Central had a more conventional Wednesday evening program for decades. But Rathbun said changing and expanding the Logos effort and renewing the STARS theme several years ago have brought rejuvenation.

“It’s been exciting to see—new people coming on board and intentional about sharing their faith with these kids,” he says.

Rathbun estimates that the number of children and volunteers represents nearly a quarter of the church’s Sunday worship attendance.

More than 10 percent of the children who gather each week are from outside the church.

“We have people who otherwise aren’t involved in Sunday morning activity joining in on Wednesday nights,” Koerselman says.

“Some parents have been plugged in because their kids participate.”

The spiritual component of the program is not lost among the participants.

“We tell our table parents and other volunteers that they are impacting these kids’ lives for the kingdom,” says Rathbun. “The kids will remember your relationship with them far longer, as you have helped introduce Christ to them.”

“We’ve developed relationships with these kids,” says Paul Adkins, who’s been a table parent with his wife, Carol, for three years running. This year, they have four boys and two girls at their table. “Carol and I are almost in tears when we see them in church or perform in their programs.

“It’s so refreshing to sit with these kids. The Lord has a plan and there’s a lot of hope in these young faces—their eyes just gleam. Wednesday night is kind of the highlight of our week!”

Logos director Tami Vanden Brink was part of the program’s transformation. The changes included adding younger children and expanding the sessions to the fall months of the year.

“The kids really want to be here—it’s not just something their parents are making them do,” she says. “I believe that it’s a wonderful way to share Christ with the kids and to show them that even though we are Christians and in church we can still have fun and learn about God.”

There were some uncertainties in getting the expanded program off the ground. The funding is significant—requiring enough to provide food for the entire school year. Recruiting adequate numbers of volunteers was also a concern.

But as the effort gained momentum volunteers turned out and many have helped for several years.

“Everyone has their own individual roles that are simple and consistent enough that it’s not an overwhelming expectation,” says Koerselman.

Central’s pastor said the benefits of the newer approach will be felt for years.

“It’s a ministry that has strengthened the mission of the church and has changed the dynamics of who we are,” Rathbun says of the intergenerational connections.

“In a lot of churches we’re kind of ‘silo-ish’ and tend to team up with people of our own strata or family group. This breaks all that down.”

Pray for the children and adults who are growing in faith together at STARS. Pray for deeper intergenerational connections in your church.

Volunteer to help with a ministry at your church that serves another generation.