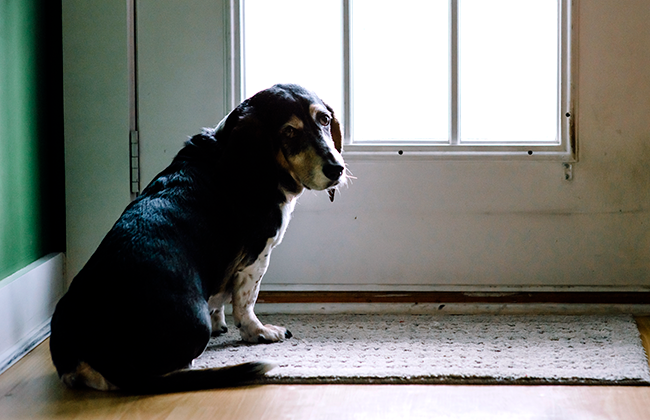 Signs of the Kingdom: A Dog at the Door

Home › Signs of the Kingdom: A Dog at the Door

As columnist Lou Lotz lets his dog in, then out, then in again, he reflects on the spiritual significance of persistence.

He is always on the wrong side of the door. Let him in and he wants to go out. Let him out and he wants to come in. He sits out there barking, and I say to myself, he can bark all day, he’s not coming in. But eventually he wears me down. I let him in, and he walks triumphantly to his bed. In ten minutes he’ll want to go out again.

This recurring canine drama always brings to mind a parable in the gospel of Luke. It is midnight in a drowsy Galilean village, when suddenly there comes this uproarious banging at the door, and a man calls out, “Friend, lend me three loaves.” With friends like this, who needs enemies? From within, an irritated voice hollers, “Go away!” But the neighbor won’t go away. This guy is shameless. He is maddeningly persistent. His horsefly annoyance finally wears down the sleeper, who gets up and gives him some bread.

Some parables are hard to understand. This isn’t one of them. If some grouchy sleepyhead will answer a midnight knock just to get some peace and quiet, how much more readily will God open the door to his children and supply their more desperate needs? The point is not that God is a reluctant giver, but that we should be persistent askers. Be like the persistent bread-borrower. Keep banging at heaven’s door until your needs are met.

Not many of us pray that way. For most folks, prayers are like quarters in a slot machine. If we don’t hit the jackpot after a few tries, we give up. Don’t give up, says Jesus. Be persistent.

A minister friend of mine says that asking God to meet your needs is a spiritually immature and primitive exercise. Prayer does not change things, he says; prayer changes you. Prayer enables you to adjust yourself to the way things are.

Really? Prayer does not change things? Nothing about prayer could be farther from the mind of Jesus. Jesus says that God invites us and encourages us to make our requests known. God waits for our prayers, wanting to meet our deepest needs.

Keep asking. Keep banging at the door. Don’t give up.

As the saying goes, “Come! Let us storm the heavens with our prayers!”

“Signs of the Kingdom” is written by and reflects the opinions of Louis Lotz, who retired in March from his role as pastoral leader of Central Reformed Church in Grand Rapids, Michigan.