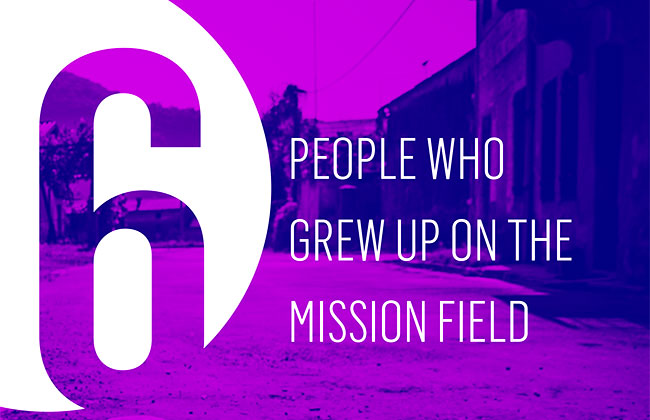 Six People Who Grew Up on the Mission Field

Home › Six People Who Grew Up on the Mission Field

Kids of RCA missionaries open up about their childhoods, their feelings about inhabiting a third-culture space, and how they’ve seen God at work.

The children of missionaries inhabit a strange space, somewhere between the culture of their parents’ home country and the culture of the places where they were raised. They admit it’s not always an easy or a comfortable space, sometimes causing identity crises or making it difficult to form friendships. But they also express gratitude for their childhood experience and for the broad perspective it has given them on the world and on God.

For this issue, RCA Today talked to six RCA missionary kids (MKs). Some grew up far from their parents’ home countries; others were the children of domestic missionaries. One is the sixth generation in a long line of missionaries. They each opened up about their childhoods, their feelings about inhabiting that third-culture space, and how they’ve seen God at work.

One Church explores six people’s views of one shared experience or ministry. Grew up in: Kenya and Ethiopia

Describe your childhood: A constant adventure. [I remember] being out with the kids at the gardens, and somebody kills a zebra, slices it open, takes out the liver, and cooks it over a fire right there.

Influence on your life now: My parents loved people; they acted as examples. That’s what I can do. One of our good friends was an atheist. He went through some really hard times, and now he’s a Christian. He was baptized a few weeks ago, and he credits us (my husband’s also an MK). We never quoted a Bible verse. We never tried to evangelize him. We were just there for him.

Learn about the ministry of Swart’s parents, who are retiring in June after 30 years on the mission field. Grew up in: Oman, Bahrain, and India

Challenges of leaving: When I left Kodai [boarding school in India], I was almost in a catatonic state. I realized that everything I knew—my whole life—was ending. I was not coming back. The life I knew, the family I knew, the countryside, the food, everything was ending for good.

Misconceptions about MKs: [People think] that I was some religious fanatic. [But] I find that I can be in vastly polar groups. In a church, I can sit at a table with the ultra-conservatives and the next day with the ultra-liberals. I’m so used to being with people of different cultures.

Read more about Heusinkveld’s childhood in his book, Elephant Baseball. Grew up in: Nicaragua and U.S.

Describe your childhood: Because Nicaragua was home for my parents, I grew up thinking about it as home. It is my home; there wasn’t anything different about it.

One memory that stands out: One of my aunts wanted to go to this really undeveloped neighborhood. I wanted to go, but my mom was so worried, so she went with us. She looked around and saw the kids eating out of the dumpsters. She had always wanted to be a missionary somewhere other than Nicaragua, but when she saw that, she realized that her country had needs.

Influence on your life: I don’t think I want to go into the mission field, [but] if I build a hospital, people are going to get more jobs. I want to serve as a doctor.

Learn about the work of Bobb-Kelly’s parents, currently RCA missionaries in Nicaragua. Grew up in: Taiwan

Currently: Student at Western Theological Seminary; previously served as a missionary in China and Taiwan

Something you learned: When my dad died when I was 11, the local Christian community and the Chinese people in general started to step up. … That was really formative for me, changing that mindset: we are no longer the foreign missionaries here to help you. They helped me as well in my growth as a Christian.

One memory that stands out: In seventh grade, I led one of my friends to Christ. Because of that, I committed my life to full-time Christian service.

Influence on your life: Whether I have a job in ministry or working at McDonald’s, my whole life is a testimony of my relationship with God. People are watching us all the time—that’s what they’ll learn about God and Christianity. Grew up in: Kuwait, Bahrain, U.S., and Canada

Currently: Editor for The Elks Magazine; sixth generation of the Scudder missionary family

One memory that stands out: I remember the Boy Scout troop we had [in Bahrain]. On the one hand, we had a sort of gung-ho American troop leader, but the kids—half of them weren’t American. We basically did it so we could go on camping trips.

Something you missed out on: I didn’t have that sense of connection to a place and people. Having been in one place all your life—that’s just not a thing that’s part of my experience.

How you see things differently: It’s possible to be both open minded and also have faith in God. That’s something that sets being a child of missionaries apart from a lot of other overseas-cultured kids. Grew up in: Niger

Describe your life: Exciting, with different cultures to interact with, and just seeing how God works, even in the little situations of every day. You get to have lots of fun experiences—I’ve been on a boat ride to see hippos, swam in the river, and have ridden a camel—and events in life that draw you to Christ. I have met a lot of people from different countries.

Misconceptions about MKs: That we live in huts with no electricity or electronic devices whatsoever; that we ride giraffes, lions, or elephants to school; and that we speak “African.” (It’s okay. I am a very forgiving person.)

Influence on your life: My last word, for kids and adults alike, is to not just have faith. But to live it out. Missionaries aren’t the only ones who do that. You can, too.

Learn about the work of Johnson’s father, an international development specialist serving with RCA Global Mission.