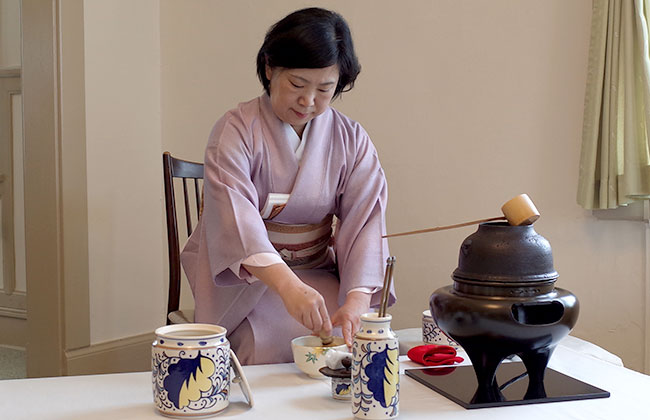 RCA missionaries Nathan and Nozomi Brownell are convinced that the traditional Japanese tea ceremony has echoes of the Christian sacrament of communion. As Nozomi has closely studied and learned to perform a tea ceremony, they have seen a number of surprising connections between the two events.

The tea ceremony is a choreographed ritual that involves a host preparing and serving tea and food for his or her guests in an intimate setting. Both the tea ceremony and communion are places where people meet together in a special way. The tea master Sen no Rikyū, who refined the ceremony, taught the concept of ichi-go ichi-e, meaning “one time, one meeting,” a reminder to treasure one’s time with another individual.

“The tea ceremony emphasizes how precious each encounter is,” says Nathan. “And of course the most precious encounter of all for a Christian is meeting Jesus.”

This focus on the individual is especially significant—even revolutionary, says Nathan—in a culture that has traditionally emphasized the group.

The Brownells, along with several Japanese researchers, recognize that some of the symbolism of communion “went underground” and became embedded in the traditional Japanese ceremony during the sixteenth and seventeenth centuries, when Japanese Christians were under intense persecution. During those years, Sen no Rikyū, whom the Brownells note had several close Christian friends, refined the tea ceremony. He often hosted it in small rooms, not unlike the upper room in which Jesus and his disciples shared their final meal. Persecuted Japanese Christians sometimes decorated the tea room with wall hangings inscribed with words from or allusions to the Bible.

“We are not saying that the tea ceremony is the same as communion,” he says, “but there is good reason to believe that Christianity deeply influenced the tea ceremony. … God sometimes plants a redemptive analogy in a culture for later Christians to proclaim.”