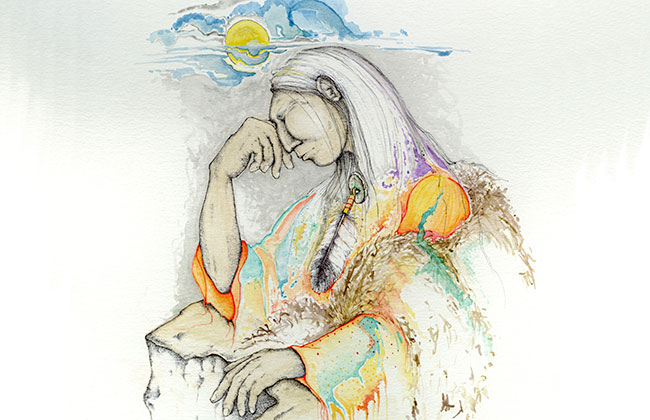 In artist Brian Narcomey’s depiction of Jesus’s final hours before crucifixion, Jesus wears a buffalo robe and streams of living water flow from his shoulder.

In his painting Gethsemane, artist Brian Narcomey depicts Jesus as a Native American, in his final hours before crucifixion. Jesus’s face expresses both the pain of bearing our suffering and our sinful nature and the love he has for us and all of creation.

Narcomey, whose art brings together Christian themes with traditional Native American imagery, says his paintings are “helpful ministry tools for Natives to come to know [Jesus], when they haven’t heard [the story] that way.”

Throughout this painting are symbols of God’s creation and of the ways God provides for his creatures. The bottom of Jesus’s left sleeve suggests the water and starry sky of the creation story in Genesis. The red, orange, and yellow rays on his left shoulder echo the rays of the morning star, the sun. In Scripture, Christ himself is called the bright morning star (Revelation 22:16). Living water flows down Jesus’s arm.

Jesus is also wearing a buffalo robe. Buffalo sustained the Northern and Southern Plains tribes for centuries. The eagle feather on Jesus’s choker not only represents another part of God’s creation, it also represents freedom, specifically the freedom we have because of Christ’s sacrifice. Along the feather are three red stripes, called blood marks, which signify the Trinity.

The red elsewhere in the painting suggests the struggles between humans that have ended in the shedding of blood. Narcomey explains, “Within his heart, Jesus is feeling this pain and suffering that has been placed upon him. All of the creation’s pain is depicted to flow up and is taken upon Jesus.”

The purple at the bottom of Jesus’s hair represents the purple robe the soldiers placed on him before his crucifixion. Although they were mocking him by calling him “King of the Jews,” we know that Jesus is truly a king, says Narcomey. As Romans 1:19-20 attests, God makes his divinity known through his creation.

Of his paintings, Narcomey says, “These pictures are a gift. It brings tears to my eyes because I know [God] is using my hand to tell his stories. As Native people, we haven’t been heard this way.”