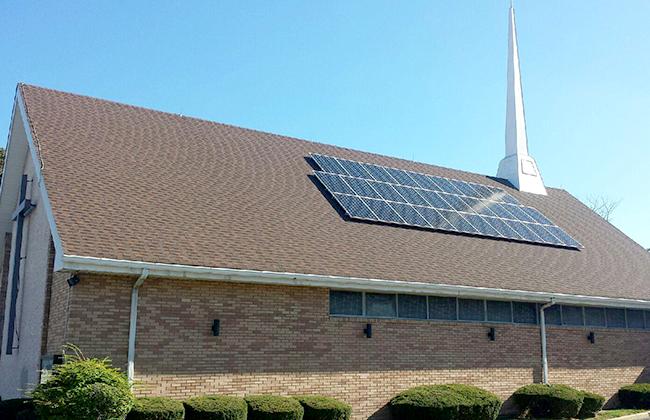 What do the Vatican and a few New Jersey churches have in common? Solar energy.

Zero dollars. That’s what Brookdale Reformed Church will be paying for electricity 13 years from now.

It all started in August 2014, shortly after Susan Dorward became the pastor of the Bloomfield, New Jersey, church.

“I was sitting outside, preparing my sermon, and I noticed how the sun was hitting the roof of the church,” Dorward says. “‘Solar’ popped into my head, and I knew it had to be a God thing, because I never would’ve thought of that.”

She and a church member, who had already converted his home to solar energy, brought the idea of installing solar panels to the consistory, and the plan took off, spearheaded by Jim Thompson, an elder at Brookdale and treasurer of the Synod Foundation. The congregation didn’t need much convincing; saving the money they usually spent on electricity sounded pretty good.

“What really tipped the scale is that solar [energy] is sustainable but also renewable,” says Dorward. “It never runs out unless the sun stops shining.”

To pay for the panels—a $140,000 purchase—the church received a loan from the Synod Foundation, which provides construction loans to churches within the regional synod.

Seven other RCA churches in New Jersey have also switched to or are in the process of installing solar panels: Reformed Church of Highland Park, Old Bergen in Jersey City, Faith Reformed in Lodi, Ponds Reformed in Oakland, Friends to Friends Community in Ridgewood, Pinelands Reformed in Toms River, and Parkside Community in Westwood.

For several of these churches, the cost savings is what caught the congregation’s attention. Even with the cost of repaying the loan, Brookdale—a congregation of about 40—is saving hundreds of dollars a month. Their electric bill dropped from $1200 in July 2015 to $300 in July 2016, an unusually hot month that forced the church to purchase additional electricity to cool the building for the day school that meets there. And once the loan is paid off in 13 years, the church’s electric bill could drop to nothing.

This is even more remarkable when inflation is factored in; at the current rate of 6 percent, Brookdale would be paying $2500 in a hot July 13 years from now. Instead, they’ll pay $0.

“You can imagine what [the future cost of electricity] would do to a church budget,” he says. “If Brookdale is going to maintain a presence here, this has a significant impact in the future years.”

It’s possible that the church could even make money off the solar panels. Utility companies try to avoid this by limiting the number of panels a building can install to match the amount of energy it will consume. But fluctuations in energy needs over the course of the year mean that the solar panels may produce more energy than the church can use, which the energy company then buys back and sells to other consumers who need it.

And there are financial incentives left and right for churches to install solar panels. Both the state and the federal government offer credits for doing so. Many solar energy companies have referral programs that allow a church to receive a rebate on the panels for every person or church that also installs solar panels.

Some churches, like Pinelands, an older congregation with many members on fixed incomes, are grateful for the savings simply to balance the budget. Other churches are putting that money toward mission.

Brookdale is using the savings to serve the community. Each month for about a decade, the church has hosted a meal, which is open to members of the community, many of whom “are having trouble making ends meet,” says Dorward. “We want to bring in a social worker to help people navigate … the system, help them understand their options and opportunities.” The church is planning to hold a town hall meeting to identify the community’s needs and provide resources in response.

In addition to the financial savings, churches are excited about solar panels as part of a sustainable energy program.

“We the church are witnessing to our faith and taking care of God’s environment,” says Thompson. “To absorb the carbon dioxide that we’re saving, we would have to remove two-thirds of the township of Bloomfield and plant trees in that area.”

Dorward agrees: “[Rather than] destroying the earth, we’re actually helping the earth!” At Brookdale’s level of energy use, the solar panels will prevent 605,000 pounds of carbon dioxide from entering the atmosphere over 30 years—the equivalent of 468,000 miles of driving.

That commitment to creation has made these churches stand out in their communities.

“Now we’re known as the church with the solar panels,” says Robert Weir, an elder at Pinelands who oversees the building and grounds. Pinelands has been running on solar energy since 2012 and is making other environmentally conscious upgrades, like a more efficient air conditioner and boiler, and LED lights in the sanctuary and parking lot.

In Brookdale’s case, the church’s commitment has even drawn people to the church. “They thought we were so progressive in our thinking that they wanted to be a part of something that cares about the earth,” says Dorward.

Is there grumbling about the appearance of the panels? “We’ve gotten no complaints from anybody,” says Thompson.

Brookdale’s environmental efforts extend beyond solar panels. Last April, the church held an Earth Day event. Various vendors—encouraging everything from wind energy to composting—set up information tables. Faculty from nearby colleges spoke about the reliance on certain forms of energy, and a repurposing organization explained the importance of creating new objects out of items that would otherwise end up in landfills.

In the fall, Brookdale held a solar seminar for community members and churches to learn about going solar; three-quarters of the participants have contacted the speaker to take the next steps. Dorward and Thompson also travel to area churches to talk about the process and the loans available through the Synod Foundation.

Not only have other congregations gotten on board, but so have individuals. Many members of Pinelands live in a retirement community in homes outfitted with electric heat, which is expensive to operate. About ten members have switched to solar and reduced their monthly costs dramatically.

One member of Brookdale, inspired by the church’s decision to go solar, installed panels on his home. His electric bill dropped to less than $3 each month. His family has chosen to use some of the money they save to donate more food to Brookdale’s community meal.

“When you save that kind of money, you can use it to help God’s creation in different ways,” says Dorward. “People are God’s creation, too.”