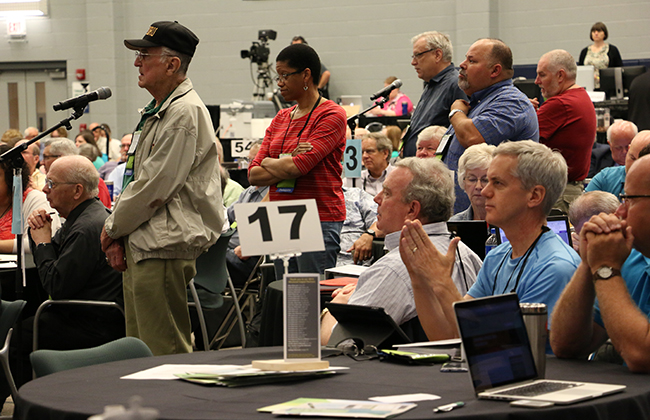 On Tuesday, General Synod voted in favor of an amendment to the Book of Church Order (Chapter 1, Part 1, Article 2, Section 11), mandating that consistories or governing bodies “shall assure that marriages in a church or congregation are between a man and a woman.” To be added to the Book of Church Order (BCO), the change must be approved by two-thirds of the RCA’s 44 classes and ratified by General Synod 2017.

This recommendation first came before General Synod 2015 but was deferred for a year to allow time for the special council on human sexuality to do its work. The special council voiced support for R 16-16, recommending that the RCA add clarifying words to the BCO to reaffirm that authority and responsibility on marriages rests with the classes and consistories.

General Synod also passed a resolution on Tuesday to “reject all forms of mockery, degrading words and thoughts, economic oppression, abuse, threats, and violence against members of the LGBTQ+ community,” regardless of position on the “moral status of same-sex behavior.” The resolution called on anyone involved in such behavior to “repent and immediately begin walking in obedience to Jesus’ command to love.”