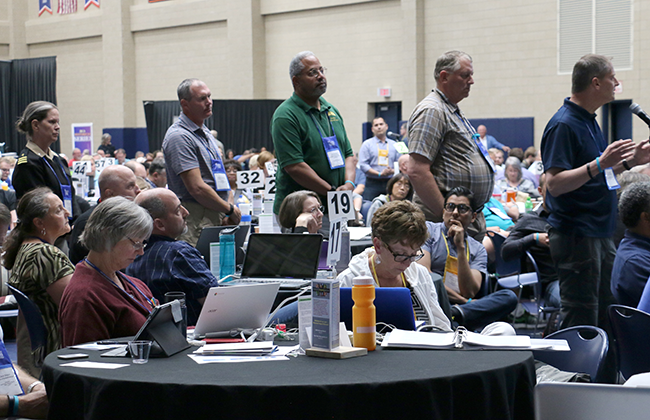 On Monday, June 12, General Synod affirmed that the Heidelberg Catechism in Q&A 108 and 109 “categorically states that God condemns all ‘unchastity,’ which includes same-sex sexual activity” (R 17-61). The vote came after debate that carried over from the afternoon into the evening. Before delegates voted, General Synod president Dan Gillett asked them to observe a few minutes of silence to pray.

Though the debate was long and involved complicated aspects of Robert’s Rules of Order, Gillett praised the synod for their decorum.

“I want to commend this body for how you are addressing each other and wrestling together from very different places and strong differing points of view,” he said, his voice breaking. “You have, in your deportment, been a witness itself compared to what we see in the world with [regard to] deep disagreements.”

The Heidelberg Catechism is one of the RCA’s four Standards of Unity. The recommendation says, “faithful adherence to the RCA’s Standards, therefore, entails the affirmation that marriage is between one man and one woman.”

Delegates considered three amendments, a motion to refer, and an appeal to rule the recommendation out of order before approving the original recommendation.

The recommendation was brought before the synod by the Advisory Committee on Overtures and New Business, in response to Overtures 37 and 38.