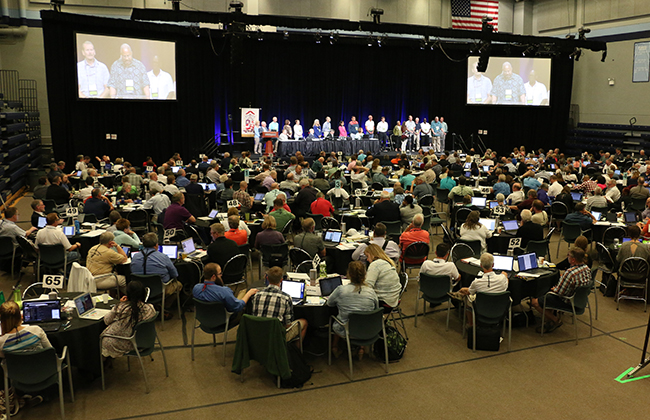 On Monday, General Synod 2016 voted in favor of adopting as constitutional the “Order for Christian Marriage” liturgy, which describes marriage as “a joyful covenanting between a man and a woman.”

Currently, the Order for Christian Marriage, which was approved by General Synod 2002, is one of a number of liturgies that are recommended for use throughout the RCA. They are not part of the RCA’s Constitution, but today’s vote elevates the 2002 liturgy to constitutional status if approved by two-thirds of the RCA’s 44 classes over the coming year. The decision also needs to be ratified at General Synod 2017.

The RCA’s constitutional Liturgy consists of the rites (and the words used to perform those rites) that have been approved by the whole church. Currently, the only liturgies that are constitutional are for baptism, communion, and ordination services for elders, deacons, and ministers of Word and sacrament.

If the marriage liturgy does become constitutional, it will be the liturgy approved for use in marriage ceremonies in the RCA.

The recommendation to adopt the Order for Christian Marriage was one of five recommendations that emerged from a special council that met April 15 to 18 in Chicago to find “a constitutional pathway forward for the Reformed Church in America to address the questions of human sexuality as it relates to ordination and marriage.” General Synod 2015 called for the meeting.

During synod, delegates met in 18 all-synod advisory committees over three days to discuss the recommendations. In response to differing approaches to interpreting Scripture that emerged in these discussions, delegates instructed the General Synod Council, in consultation with the professors of theology, to develop a resource that describes the Reformed approach to interpreting Scripture.

Four other recommendations arose from the report of the special council but were not adopted: