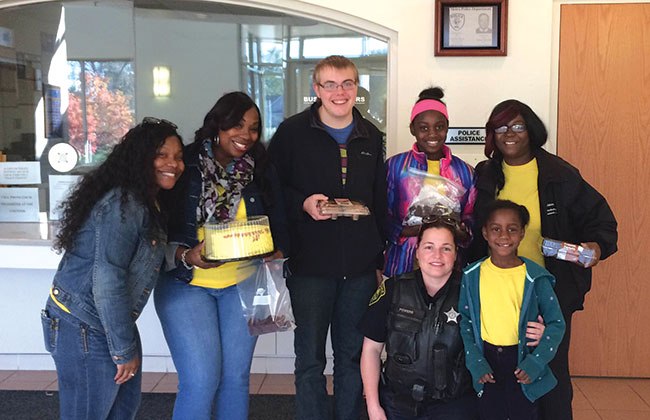 The Business of Making Disciples

Home › The Business of Making Disciples

It wasn’t until Ann Bilbrew came to Riverdale that she saw a vision for her ministry.

[Riverdale Ministry Center is in the business of making disciples.]

When “ministry center” means so much more than “church”

Count yourself lucky if you have met Ann Bilbrew. Energetic, as likely to laugh as pray, and apt to rave about her children, Bilbrew is the pastor at Living Springs Riverdale Ministry Center in Riverdale, Illinois, a church plant associated with Living Springs Community Church (RCA) in Glenwood.

The idea for the Riverdale Ministry Center started around 2008, when Bilbrew was a student at Western Theological Seminary and interning at Living Springs Community Church. She spent one Sunday filling the pulpit at Ivanhoe Reformed Church in the nearby village of Riverdale.

Ivanhoe was a very small, aging congregation in the middle of a community that had changed significantly over the previous decades. Today, the average annual income in the community is under $15,000. Many households are headed by a single parent or by grandparents. Businesses have left the community. The number of men imprisoned or taken to court has increased.

Prior to preaching at Ivanhoe, Bilbrew pictured herself on staff at Living Springs. “I thought I’d be the associate pastor of the Glenwood site [Living Springs],” she says.

“It wasn’t until I went to Riverdale that I saw a vision.”

She returned to Living Springs and shared that vision with Dave Izenbart, the senior pastor and her mentor. “I started talking about this village…about walking up and down the streets and talking to people on their porch.”

Bilbrew walked with Ivanhoe through the church’s closure and then began to make her vision for Riverdale come alive.

For three years, Bilbrew, her two children, and her mother acquainted themselves with Riverdale. They learned that the community disliked the word “church” because it suggested ministry that’s confined to Sundays. So they called the plant a “ministry center.” Bilbrew says, “We’re the center with the open door policy.”

“The first service had about 35 people,” she says. “Without any advertisement, we grew. We didn’t advertise because we had no space!”

From the beginning, Riverdale Ministry Center was committed to the village.

“We went to the school board and asked for permission to work in the toughest school in Riverdale—Washington School,” says Bilbrew. “We donated coats, offered spiritual formation development, brought food baskets. [Students] got to see us form a relationship with them. Now they ask us to go to court with them. We help young people fill out college applications. [Now] when we walk in [to the school], the kids say, ‘There go our people.’”

For a church its size, Riverdale manages to offer all kinds of ministries. It teaches classes for senior citizens on wills, power of attorney, and second-generation parenting. It hosts workshops for non–African Americans who want to adopt African American children. There are also workshops about Jesus and about prayer.

Amidst all this busyness, Riverdale Ministry Center keeps its people healthy.

“We have a three-ministry limit,” says Bilbrew. “And one of them is you’re about the business of making disciples. So you only get to choose two of them. We also have a spiritual formation training for volunteers. You can’t feed into somebody without being fed into.”

Bilbrew herself has been fed by the rest of the Living Springs staff.

To other women considering church planting, she advises being involved in community organizations, making a priority to eat dinner as a family, and to have two cell phones—“one for the church and one for yourself.”

And she urges women to find good mentors, both male and female. She ticks off a list of the staff at Living Springs who have mentored her and says, “If other women—if new planters—had that kind of mentoring, they’d be healthy.”

Bilbrew’s love for her work is palpable. When she mentions that the congregation moved into a new space in November, she’s giddy with excitement. “We have the entire building to worship! We’re going to advertise!” she says.

“The congregation of Riverdale—they love and serve like Jesus,” she says. “I love being their pastor—yes, I do.”