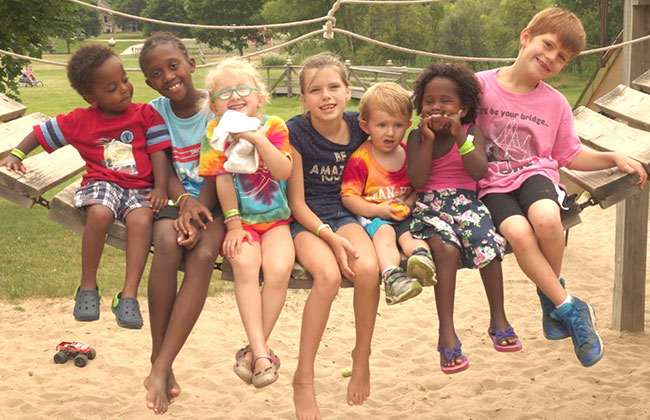 After 50 years, Cran-Hill Ranch looks different, but its mission has stayed the same.

1968 was a year of new beginnings for both Curry Pikkaart and Cran-Hill Ranch.

It marked the launch of Cran-Hill, an RCA youth and family camp in rural central Michigan. A longtime dream of people including the regional synod’s youth ministries director Leonard Weesies and Kalamazoo pastor John Tien, the camp opened in humble circumstances.

“I remember the first day I came to report for work,” says Pikkaart, who was a college student at the time and one of Cran-Hill’s first camp counselors. “At our first meeting there was me, Leonard, and seven girls—that was the whole staff.”

Even with meals cooked outdoors on open fires and no permanent housing for youth campers, the dedicated staff pressed on.

Over five decades, Cran-Hill has blossomed into a 540-acre campus with access to two lakes and more than 100 family campsites. There’s also a retreat center, lodge, camp store, barns with horses, an outdoor chapel, and residential cabins to handle more than a thousand campers each summer.

It’s a far cry from 1968, when camp headquarters was an old stone house (which still stands as a landmark near the current office). Fifty years into its ministry, Cran-Hill seeks to stay on top of current trends, like modern amenities, year-round programming, and access to camp facilities.

“Our next big need is an indoor meeting space [and] chapel facility,” says Cran-Hill’s executive director Scott Barger. A matching gift campaign is already underway. “There are groups who want to come here but we can’t accommodate them.”

Still, some aspects haven’t changed: “As I’ve looked into [Cran-Hill’s] history, it’s been refreshing to see vision and mission remain the same even through tremendous changes,” says Barger.

The camp’s legacy includes spiritual formation for both campers and staff. Pikkaart’s own journey was influenced by his time as a counselor at Cran-Hill. After college, he entered seminary and became a pastor, serving several RCA churches in Michigan that had families who camped at Cran-Hill.

The camp also changed his personal life: while on staff as a camp counselor, he met his future wife, Barabara Vugteveen, who was a camp nurse. “We were the first Cran-Hill romance,” he says.

Funding from the regional synod got Cran-Hill Ranch on its feet, but the camp soon stepped out on its own with an independent board of directors. (Tien, who turns 88 this year, is still a Cran-Hill board member.) Financial support comes largely from individuals and churches, as well as from camp and facility fees. But RCA ties still abound. A significant percentage of campers, families, and chaplains still come from Reformed backgrounds.

“We are the RCA’s camp and we want people to know we’re blessed by that continued ministry life together,” says Barger.

On September 27, the camp will formally celebrate its fiftieth anniversary with a banquet at the Pinnacle Center in Hudsonville, Michigan. The event begins at 6:30 p.m. All are welcome. For more information, visit www.cranhillranch.com/anniversary-celebration.

Other special events will take place at Cran-Hill each weekend throughout the summer, including live music, square dancing, and inflatables for kids. On Sundays, the worship time will highlight the camp’s legacy, with testimonies from Cran-Hill alumni.

Meanwhile, the Cran-Hill crew will live out its mission in another summer of ministry. “We’re now into the fourth generation of families who come here,” Barger says.