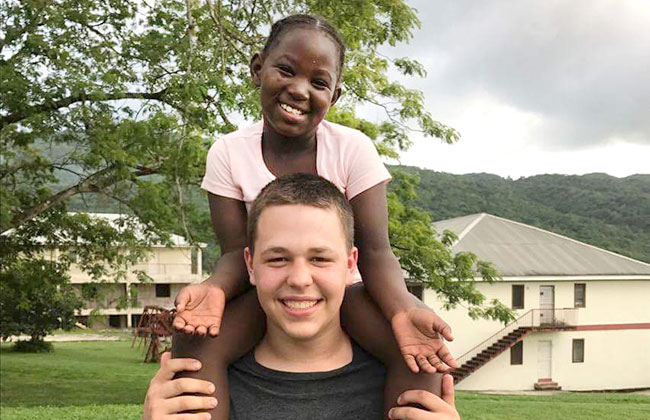 A commitment to prayer dramatically changed one youth group’s mission trip in Jamaica.

When Jessa TerBeest started planning to take her youth group out of the country, she hoped getting them out of their comfort zone would give them a bigger picture of who God is.

She thought it would come through service. She didn’t realize it would happen through prayer.

The group—15 high school students and 9 adults from Alto Reformed Church in Waupun, Wisconsin—served at Caribbean Christian Centre for the Deaf (CCCD) in Montego Bay, Jamaica.

The very first morning, before starting their work, they heard from CCCD coordinator Chris Briggs, who told them about the “prayer chair.”

It’s not a chair, exactly. More like a posture or a practice.

Briggs, who has since become an RCA missionary, explained that at CCCD, part of a mission team’s work is prayer. For each half-hour block during the workday, somebody from each work group would sit in the dorm or under a tree and use those 30 minutes to pray and read Scripture.

Because Alto Reformed’s team was split into several work groups, that meant three or four people were praying each half hour.

“I don’t think any of us really understood the power of prayer until that week,” says TerBeest, Alto Reformed’s youth director.

Two days in a row, an adult leader got sick. During their prayer chair time, the others asked God for healing. And two days running, both leaders were better by noon. One of those leaders was a nursing student, Sabrina, who was able to volunteer in the infirmary that same afternoon—the main reason she had joined the trip.

The team also prayed for the people they were serving, the ministry of CCCD, and stronger relationships between the students on the trip.

During the week, the group painted, repaired a broken water main, excavated land for a new classroom, and helped prepare the campus for the new school year. The students from Wisconsin connected with the students from Jamaica in spite of cultural barriers. TerBeest’s group had learned a little sign language to communicate with students at CCCD, who are deaf. They didn’t know enough to converse—just to introduce themselves—but one evening, the Wisconsin students taught the Jamaicans a game their youth group played, and “it was like everything clicked,” TerBeest says. “This game connected them all together.”

Since returning to Wisconsin, TerBeest says she has seen ripples of impact from the mission trip. The growth in prayer continues to show up in willingness to pray for people and to ask friends what they need prayer for.