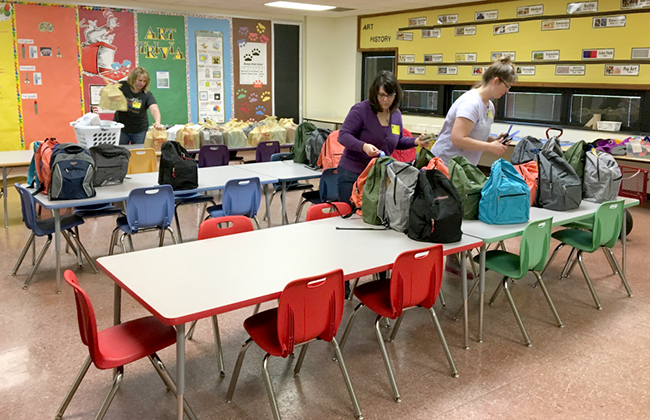 Three states. Three school districts. Through the efforts of three Midwest churches, a combined 561 children started school in the fall with new backpacks and supplies.

The churches are American Reformed in DeMotte, Indiana; Second Reformed in Pekin, Illinois; and Hingham Reformed in Hingham, Wisconsin. All three are small-town churches whose leaders were surprised when they learned about the level of need in their local schools.

American Reformed has been active in multiple ministries that impact the elementary school across the street. The church partners with Kids Hope USA to offer one-on-one mentoring; for ten years, it has run a basketball camp in the school gym from January to March; and the congregation has distributed 60 backpacks with food to students each weekend for three years. In 2016, American Reformed joined a community outreach event in which local service organizations, businesses, and churches hosted a back-to-school fair at a local park. Each partner furnished one item from the children’s school supply list (American Reformed provided disinfectant wipes), and students from kindergarten through high school went from booth to booth, filling their backpacks.

“Everyone—churches, banks, Boys and Girls Clubs, Boy and Girl Scouts, Rotary—works with each other rather than competing, and it improves the quality of life for children in this community,” says Troy Nanninga, pastor of American Reformed.

Through the event, the community provided 460 backpacks filled with supplies, and Nanninga says they have plenty of donated items left to help with next year’s fair.

One state to the west, in Pekin, Illinois, Sara Appleyard-Pekich helps run the VBS at Second Reformed, which her husband pastors. Appleyard-Pekich, herself a specialized minister, says the church has always raised funds for outreach, but typically that outreach is international or elsewhere in the country. But last summer, the church focused closer to home. Through a connection at the local Boys and Girls Club, the church leadership found out that Pekin students needed supplies and backpacks. Second Reformed decided to make it their VBS fundraiser, packing 50 backpacks with five or six items each and delivering them to the Boys and Girls Club in August.

“It turns out our children and congregation have a huge heart to help kids in our community,” says Appleyard-Pekich. “Their eagerness to give was amazing, and we loved instilling in them the value of helping others right in our backyard.”

Further north, in the tiny town of Hingham, Wisconsin, sits just one church. Steven Bakker has pastored Hingham Reformed for 25 years. In a town of about 900, the church has 500 people through its doors each Sunday, and Bakker thought he knew the town. So he was shocked when the church began to learn about the needs of children in Hingham’s school system. He hadn’t been aware of the extent of the need.

Today Ed and Beth Rauwerdink are part of Hingham Reformed’s community impact team and are leading the church’s efforts to support the local school. Ed, a retired teacher, reached out to the superintendents to start a conversation. The Rauwerdinks soon learned about the need for school supplies and that, for $25, the church could sponsor a backpack filled with supplies. Between the congregation and a generous grant from the supermarket Shopko, 51 backpacks were filled and donated in the fall.

“A lot of people aren’t aware,” says Beth, “but there are many people in need, and our goal is being the feet of Jesus to our community.”

There are future plans as the community impact team at Hingham Reformed engages more congregants in its work, but Beth believes this has been a good start.

“We have a generous congregation,” she says, “and this is a gesture of what God’s love looks like.”