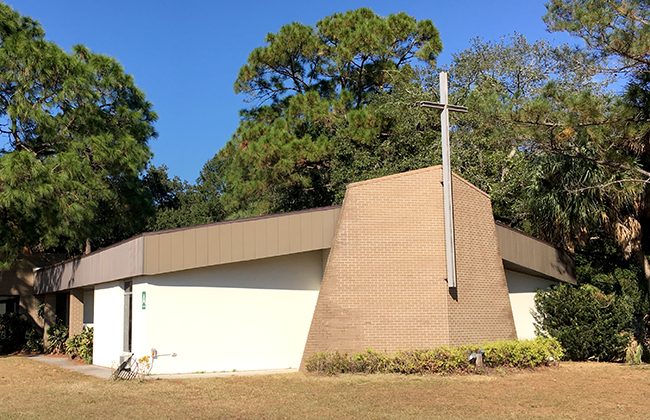 After damage to its building, church reflects on its purpose in the community.

Some see holes and leaks in a building as problems, but First Reformed Church in Tampa, Florida, doesn’t. The congregation and its pastor of three years, Dave Hubbartt, instead see an opportunity that not many churches are afforded.

“We have been given a great opportunity to reevaluate everything and make a new set of decisions appropriate to our context now,” says Hubbartt.

Built in 1962, the building that houses the sanctuary, library, and offices had weakened in the harsh Florida climate. It came to a head, however, in December 2015 when a repairman had to punch a hole in the floor of the sanctuary to look for the source of ongoing water problems. The hole resulted in a geyser, which completely flooded the ailing building.

Fortunately, says Hubbartt, the campus also includes another structure that housed the fellowship hall and education wing, so gradually the fellowship hall was converted into a multipurpose worship space while the congregation and staff considered other options for the sanctuary.

“It’s been a very interesting year,” says Hubbartt, “but God has blessed us with the right consistory for the moment. We have business, architecture, and project management expertise, and they’ve been ready to lead, but also ready to press ‘pause’ and take the time necessary to consider every angle of our situation.”

As the church considers all those angles, it has turned to various resources for wisdom. Hubbartt has found help in When Not to Build, written by Ray Bowman, an architect who consulted with churches that were contemplating building projects. First Reformed has also benefitted from talking to other area churches who have faced similar decisions.

Due to repairs that exceed half the value of the structure, the city of Tampa told First Reformed that renovation would require bringing the building up to code. Doing so would involve elevating it another 11 inches, a daunting and even unfeasible task, among a host of other things.

“The cost of repairs began to escalate well beyond the benchmark we set for ourselves, and the decision was made to demolish in February,” says Hubbartt.

“Resisting the temptation to rush out and repair or rebuild has been tough, but God has reminded us all along of other things we want to be about.”

One of those things is ministering within the church’s context. First Reformed’s neighborhood is becoming steadily more Hispanic, and the congregation has made a firm decision to stay planted there. As a result of talking with Eddy Alemán, the RCA’s coordinator of Hispanic Ministries, the church is considering hiring a Spanish-speaking pastor to reach its neighbors.

In preparation for demolition, the congregation faced the formidable task of what to do with 54 years of accumulation. An inventory team was a great help, says Hubbartt.

Despite the obstacles, the congregation is committed to its neighborhood and intends to continue to worship and minister there.

“We hope, pray, dream, and seek together to find God’s solution to our board-and-brick problem,” he says. “But as we pray, God has reminded us that we are a spiritual house being built with living stones. We build the body of Christ first, and pray for another 50-plus years of fruitful ministry within this community and denomination.”