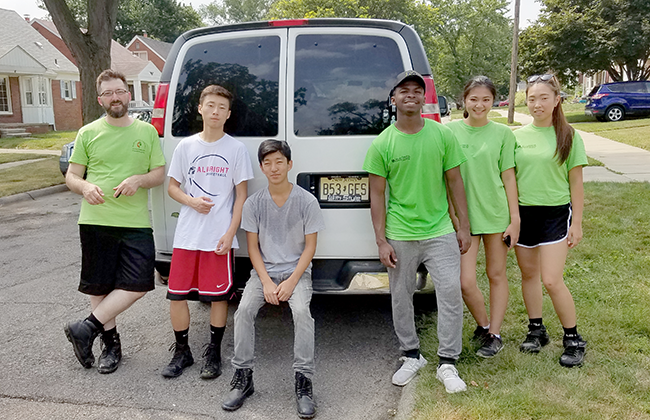 Where Are We Going Next Year?

Home › Where Are We Going Next Year?

Six of the DRS volunteers from Reformed Church of Highland Park

“In the van, the students asked, ‘Where are we going next year?!’ We weren’t even halfway home, and they were looking forward to the next work trip,” said Anthony DiGrigoli.

Anthony, who has volunteered as a Green Shirt (a World Renew DRS volunteer) four times, led a group of students and adults from three New Jersey and one Staten Island church as they fixed homes in Detroit, Michigan, for a week in July.

What did they like it so much? Anthony said that, in part, they liked the things that young adults often enjoy: they were away from home, they stayed up late, and they spent time with their friends. But a big part of the trip’s success was the work itself. The students liked helping others, they felt important, and they felt like they had a positive impact on people’s lives.

What shocked the entire group, all 34 of them, was the amount of mold in homeowners’ basements three years after the flood. The teens met one gentleman who was living in a house with a moldy basement. His neighbor, who knew that he spoke only Chinese, offered to connect him with assistance.

“The flood was three years ago, and this gentleman’s entire basement—entire basement—was covered in black mold,” said Anthony. “Harry (a fellow volunteer who is certified in mold remediation) and I went downstairs and immediately turned around and went right back outside. We were quickly outfitted with full-body protective suits, instructed in handling toxic mold, and then we gutted and sanitized the entire basement. We were amazed that the homeowner was living in those conditions, but we quickly realized that the language difference was the reason he wasn’t able to get his basement taken care of. We were very thankful to be able to get the mold out of his home.”

Note: Black mold can cause serious health concerns and needs to be treated properly. Volunteers are given the specific instruction, protective gear, and the resources required for handling surfaces covered with black mold.