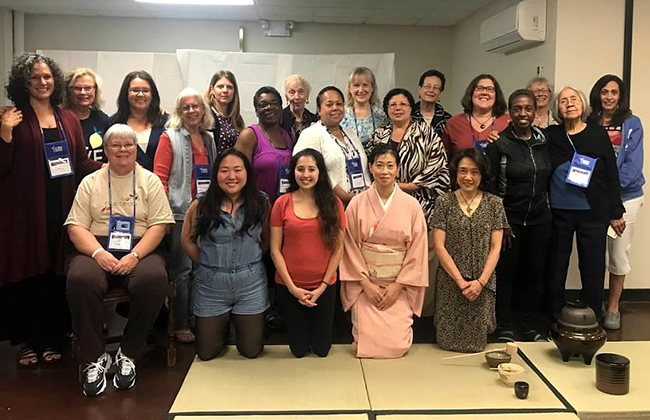 At Home in the Faith

Home › At Home in the Faith

Japanese Christians in New York City find a church that feels like home. Now they want to bring their faith back to their family and friends in Japan.

Members of JAUC and the women’s sankofa group shared an evening of hospitality, history, and culture.

On the brink of the twentieth century, a Japanese evangelist living in Portland, Oregon, felt God calling him to minister to the young Japanese men working in the Brooklyn Navy Yards. He couldn’t afford the train fare, yet he still managed to answer the call—by walking the nearly 3,000 miles from one coast to the other. Once in Brooklyn, he began teaching Sunday school classes and using the Bible to teach English.

As the Japanese community in New York grew, two more mission churches for Japanese speakers were formed, including one supported by the RCA Women’s Board of Domestic Missions. The Immigration Act of 1924 halted immigration from Japan to the United States. Toward the end of World War II, however, the East Coast again experienced a surge of growth in the Japanese community, as evacuees from the internment camps moved east, reluctant to return to their West Coast homes due to the severe prejudices they faced.

Seeing the need for combined resources to accommodate this increase in population, the three mission churches decided to join together, forming what is now known as the Japanese American United Church (JAUC).

Because of its history as a mission church, JAUC, a joint RCA and United Methodist congregation in Manhattan, was on the itinerary for an RCA women’s Sankofa journey last year. (Sankofa means “looking back to look forward.”) The trip allowed women to retrace the steps of their historical mothers and sisters in the faith, with a special focus on mission.

The church’s history is unique—and certain parts are painful—but the women on the Sankofa journey received much more than a fascinating history lesson.

“We experienced their hospitality and their meals—Japanese home cooking—and felt that sense of home,” says Liz Testa, coordinator for Women’s Transformation and Leadership in the RCA. “It warmed my heart so much to see the diverse women of our trip walk in and receive the hospitality of these Japanese women.”

The church is a welcoming community to Japanese immigrants, Americans of Japanese descent, and those who are simply interested in Japanese culture. Many in the church’s congregation come from Japan to the U.S. for college, graduate school, or business, and then settle, marry, and raise their families here. They find at JAUC a sense of home.

“A lot of people are drawn to our church because it’s a weekly oasis for them,” says Gerri Yoshida, a longtime member of JAUC. “During the week, they have to adapt to American culture and speak English all the time. It’s a great comfort for them to meet up with friends, speak Japanese, and have things understood culturally.”

The continued use of the Japanese language is key in maintaining the strong cultural identity of the church, says Yoshida. Congregants want to pray in their heart language.

JAUC has a bilingual service every Sunday, with worshipers simultaneously singing either out of a Japanese hymnal or an English hymnal. The sermon is preached first in Japanese, and then again in English. The same is done for the Lord’s Prayer, Apostles’ Creed, and other parts of the liturgy.

It is the prevalence of Japanese culture that those who are unfamiliar with JAUC often find so striking.

“In other parts of the country, there’s more assimilation,” says Testa. “But at JAUC, there are people who have been here for a while. … The church is really monocultural; it is Japanese. There’s a uniqueness around that.”

In some ways, the blending of Japanese culture and Christianity seems natural. They share a high moral and ethical sense, and both value humility.

“Japanese people are always thinking of other people first,” says Yoshida. “There’s a sense of self-sacrifice, a sense of giving-ness, like parents giving up everything for their children. It’s similar to what they learn in Christianity.”

However, Yoshida says there are striking differences between the cultures, and she perceives a spiritual emptiness in Japan. Just 1 percent of the country’s population identifies as Christian. That poses a challenge for many members of JAUC; they want to share the gospel message with their family and friends back in Japan, but there’s so much resistance to it.

“The social norms are very strong [in Japan],” says Yoshida. “It’s a very homogenous culture. There’s a strong sense of conformity and community. They want to belong. If you start to act differently, it’s really hard because of all the social pressures around you.”

In sixteenth- and seventeenth-century Japan, when Christianity was forbidden, “hidden Christians” incorporated Christian practices into the traditional Japanese tea ceremony. Researchers believe that elements of the ceremony reflect those of communion.

For example, the tea, served to guests by the host, is accompanied by a sweet cake, not unlike the pairing of bread and wine in communion. The setting, too, echoes the reconciliation at the heart of communion. Traditionally, tea houses had very small doors, requiring the samurai to remove weapons and shoes before entering. In a hierarchical society, these signs of humility created an equality among the guests.

Historically, the tea ceremony was an avenue for these hidden Christians to keep their faith alive. Today, it is a potential vehicle for mission and easing the resistance.

“It might be another way to reach people with Christianity,” says Yoshida.

The church continues to find new avenues for mission. JAUC is now exploring disability ministry and outreach. At the center of this emerging ministry is RCA disability advocate Mana Hashimoto, who came to the U.S. from Japan, having lost her vision due to optic nerve damage.

Friends in Japan told Hashimoto that less stigma, shame, and silence surrounded disability in the U.S. At JAUC, Hashimoto has found this to be true, receiving acceptance, affirmation, and opportunities for leadership.

“The hope is that this spirit of radical inclusiveness will welcome others from Japan to hear that God loves and accepts them as they are,” says Yoshida. “Then they, too, can find a spiritual home at JAUC.”