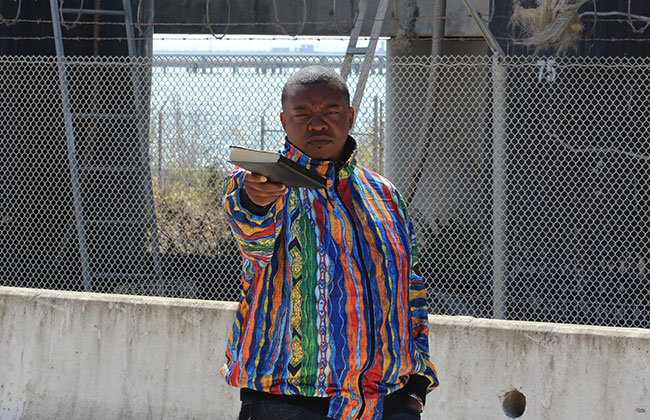 Oakland, California, is a city divided. Oakland City Church (RCA) is working to change that.

Oakland, California, is a city divided.

The wealthy, the white, and the well-educated live in “the hills.” Lower income residents, people of color, and those with less formal education live in “the flats.”

As Josh McPaul saw when he moved to a neighborhood sandwiched between the hills and the flats, the differences between these two areas can be stark.

McPaul believed that the church could be a place for Oakland’s hills and flats to come together—but he didn’t see that happening in Oakland’s existing churches. So in 2010, he and a friend, Larry Austin, decided to start a new church—one that could reach both the hills and the flats. They called it Oakland City Church (RCA).

Like their divided city, McPaul, a white Australian, and Austin, an African American from the flats, were unlikely partners. That was no accident.

“We wanted to be a ‘show-not-tell’ church. So we committed to having leadership that represented both sides of the city,” McPaul says. “We even decided to share the pulpit 50/50.”

Their teamwork paid off. People from both sides of the city came to the church, drawn to McPaul’s and Austin’s different worship and preaching styles.

But getting people in the door doesn’t automatically make them a community.

“You have to move beyond the shallow, ‘Well, we’re all in the same room,’ to real relationships,” says McPaul.

Early on, Austin mistook a difference in worship style for a poor reaction to his preaching: “I come from a background where we say ‘hallelujah’ and ‘amen’ in response to a preacher,” he says. “When I started at Oakland, I was looking at a quiet audience. So I thought I wasn’t reaching them. But then after the service, they’d come up and say, ‘That was really great.’”

Not all cultural conflicts are so easily resolved.

“I think it’s tempting for those of us who are white to feel like race is not a huge issue, or if it is, it’s something that we can solve easily,” says McPaul. “But this is going to be an ongoing challenge…It’s more like a merry-go-round than a linear movement from misunderstanding to understanding.”

This means having some difficult conversations. But for Oakland City Church, the benefits are worth the extra effort.

“The more that we’ve done this, the more we’ve found that [being a diverse church] is a gospel imperative,” McPaul says. “We understand the gospel better when we encounter it with people who are different than us. When you’re in the church and you’re asking yourself, ‘Why am I here?’ the answer is not because we’re all the same race, or we’re all from the same socioeconomic background. Your answer is that we’re here for God’s grace and God’s love.”

“We have had to get over ourselves,” Austin adds, “and realize that worship is not about our convenience or comfort. It’s about the one being worshiped.”

However, this approach to worship can be daunting for new believers, especially people of color.

“This is a group of people that don’t really have a space in our churches—we talk differently, we worship differently, and we got different life experiences,” Austin says. “I feel God is calling me to give this group a church that speaks to them.”

Having been involved in the hip-hop culture of the flats for most of his life, Austin is well suited to do this. So he’s taking a group of evangelists from Oakland City Church over to West Oakland to start a worship community for the hip-hop generation. Austin is a longtime Christian rapper, a gift he’s putting to use in the new ministry.

Though he’s no longer a pastor at Oakland City Church, the church financially supports the new venture, called “Elevate.”

“The area [of town] we’re planting in is called ‘the bottoms,’ so the idea of Elevate is to bring people up out of the ‘bottom’ and let them know that they, too, are God’s children,” says Austin.

That won’t be easy.

“People are hurting, and they’ve seen some really bad examples of Christianity, or they’ve been burned, and are just kind of turned off [by faith]. And they’ve turned to their own devices,” says Quentin Richardson, one of the evangelists helping Austin. “That apathy is going to be a tough challenge.”

Richardson would know. He’s describing himself before Austin invited him to his Bible study at Oakland City.

“It always seemed like [the gospel] was coming from over my head, like people were talking down to me and selling me something that didn’t relate to me,” Richardson says. “But I always tell people, ‘Larry was a brother that looked like me, talked like me, and had a similar background…To hear him actually preach the Bible in the same way we could talk about a football game was just incredible to me. It made the Bible study come to life.”

Richardson became a disciple of the Bible study and then of Oakland City Church. Now he’s helping Austin make new disciples in much the same way.

Part of the same story

Austin sees this as an extension of the work God started at Oakland City Church.

“When we started Oakland, there was more people from up the hill…but God eventually brought in people from the flats too,” he says. “So maybe this time it will be the opposite.

“If the gospel is true, we’re all part of the same story. The church and the Spirit are at work to restore all of humanity, so if we can get people back into the storyline, we may be different from each other, but we’ll start seeing each other as brothers and sisters.”

Pray for further unity in the city of Oakland and other cities with deep cultural divides.

Consider the cross-cultural misunderstandings that exist in your context and work to overcome them.